A Look at How Glass is Holding up During Natural Disasters 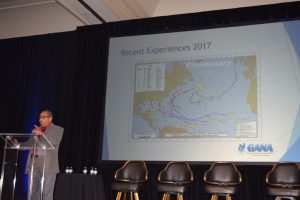 Impact glazing has evolved immensely throughout the past three decades, yet the industry still has more work to do according to Kishor Mehta, wind engineering expert and professor at Texas Tech University. He held a panel about managing risk and growth in response to natural events at the 2018 Building Envelope Contractors (BEC) Conference in Las Vegas today.

As far back as the 1970s, engineers have noticed that roof gravel from other buildings is a major cause of glass breakage during hurricanes, which leads to increased interior damage and higher insurance claims.

“The problem didn’t get traction in the industry until the mid-1990s, despite knowing about it in the ‘70s,” said Mehta.

Since 1995 when impact glazing was made a requirement for the bottom 60 feet of a building where wind speeds can reach greater than 110 mph, fewer buildings experience glass breakage.

“If you have a building sitting there for 50 years, there’s a 7-percent chance that an extremely high wind speed will occur. If you think about it worldwide, somewhere there will be a wind speed that is extreme. It’s important to recognize that there is a chance of that occurring in the 50-year life of a building,” said Mehta.

“A few broke, creating tiny pieces of glass, during the hurricane. That then acts as roof gravel as far as window glass is conferenced, hence, you have damage,” said Mehta. “The industry has come a long way and has done very well, but broken tempered glass in hurricanes causes additional damage, particularly in a high-rise building.”

There is a need to eliminate debris, according to Mehta.

“You can design for impact, but the best solution is to eliminate debris,” he said. “It’s detrimental for the glazing industry.”

He also suggested that architects consider implemented more impact-resistant glazing into their buildings located in windy areas like Chicago or Dallas where high wind speeds exist due to tornadoes.

USGNN.com™ will continue to provide coverage of the 2018 BEC Conference throughout the week.