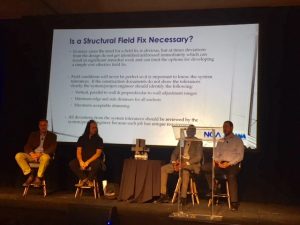 Before the 2018 Building Envelope Contractors (BEC) Conference wrapped up yesterday in Las Vegas, attendees had the chance to listen in and learn about a number of important issues for the contract glazing industry. Two panel discussions provided insight and discussion that focused first on field fixes for curtainwall, followed by successful curtainwall mock-ups.

McFarquhar noted the importance of coordination on the project, explaining you must be cognitive of the project schedule when working with other groups and parties, and said it’s important to be able to document things quickly on-site. “Never underestimate the power of a napkin or sandwich bag,” he said. “You can’t go wrong with field sketching.”

This, he said, can allow for collaboration/discussion by field personnel and also provides a launching direction for the design team.

Speaking of logistics, he said Building Information Modeling (BIM) is also becoming more prevalent, depending on the complexity of the conditions. BIM and other modeling tools, he said, can be effective when dealing with complex geometry or intersections and also provide information for dimensional constraints.

Water control storefront can also pose challenges. Here, Santocono said the installation needs a drip deflector that allows the water to be reflected off the horizontal. “A lot of times the thing that’s missing off a storefront is a drip deflector,” he said.

Condensation is also a concern and there are many contributing factors. As Santocono said, “There are condensation problems all over the place.”

In new construction, natural moisture from uncured cement, plaster and paint, can pose a problem, as well as inadequate airflow across the system.

Nordin focused on situations where a structural fix might be required.

“In many cases the need for a field fix is pretty obvious,” he said, explaining that field conditions will never be perfect so it’s important to know the system tolerances.

“Installers should communicate with the system designer to fully understand what the tolerances are,” he said. “Every project is different and they all have unique loads and situations.”

The main question to address is what type of field fix is necessary: general or location specific? “That’s dependent on a lot of things, but mainly the field condition experience of the installer and also the amount of deviation being seen in the field,” he said.

A general field fix, he explained, addresses recurring or potentially recurring issues at multiple similar locations throughout the project. If developed in a timely manner, he said these can prevent costly work delays.

A location specific field fix addresses a specific location or anchor and cannot be used at other similar locations.

The panelists also looked at different standards and test methods, including test standards for air barriers.

But as McFarquhar reminded the audience, “Not every standard is applicable to your project or what you’re trying to test. You have to be very careful in understanding what is applicable.”

What Makes a Successful Mock-Up?

Johnson addressed the question of why testing is important.

“What it all boils down to in this: verification. We’re there to test and verify that what we’re proposing to put on the building actually does what we think it’s going to do,” he said. “That verification can have all the difference.”

Johnson explained that what to test sometimes depends on the budget.

“The curtainwall industry now being mostly unitized is not foolproof, but it’s the best thing we have going for us right now. When it comes to what you’re going to test you have to start off with contractual obligations. Someone’s already made the decision,” he said.

Van Volkinburg commented that the architecture and walls of buildings are changing, and noted that when looking at what needs to be tested it’s important to not forget verification.

“I’m not ready to allow a one-third reduction in field testing. We ought to test for the requirements of the job all through the testing,” he added.

According to the panelists there are instances that could include 20-plus tests, depending on repeats of static water, dynamic water, and air infiltration tests.

“Mock-ups can get complicated when verifying different materials and systems of a building,” said Van Volkinburg.

He added that “glaziers need to evaluate the opening [they’re] going to use and make sure it’s clean and the right size because if it leaks the glass guys will always get the blame. Glass isn’t the problem it’s the interface between that and the adjacent material.”

Noting that tendency to blame the glazier whenever there’s a leak around the window system, one audience member asked the question: “shouldn’t we hold the same standards for surrounding conditions and other trades … why is there not a big push to get the other trades compliant?”

Johnson commented, “there is, but it’s about economics. When the wind blows and the rains fall they only hit the glass, they don’t hit the masonry. The whole building is exposed to the same weather systems. The glass industry is leading the building products. The others haven’t caught up. And from the economic standpoint it’s just tough. I’ve been told 50 percent of penetration in stucco walls leak.”

Both Johnson and Van Volkinburg stressed the importance of verification.

“When we get to the field you still have to make it work …” said Johnson. “If they can’t install the mock-up correctly what are you going to do in the field? Our business is a tough business but don’t forget verification.”