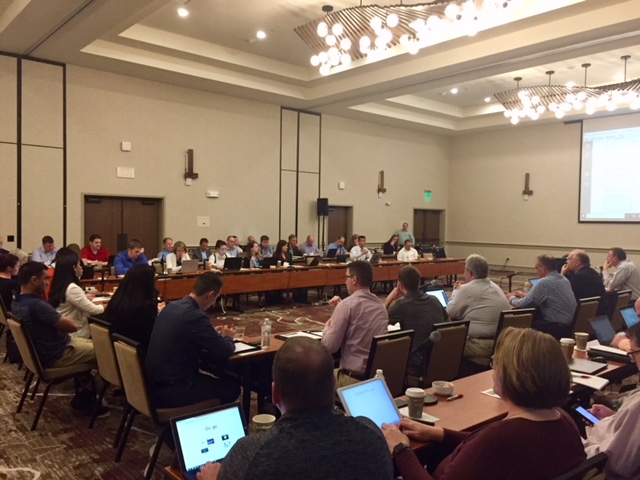 Meetings of the 2018 Annual Conference are underway this week in Napa, CA, including the insulating and energy divisions.

The first meeting of the integrated Glass Association of North America (GANA)-National Glass Association (NGA), the 2018 Annual Conference, is underway this week at the Napa Valley Marriott Resort & Spa in Napa, CA. A number of organizational and re-structuring changes are in the works, but this year’s event is taking place in the typical format and includes meetings of each division. This morning began with reports as well as updates and activities from the insulating and energy divisions.

Aaron Thompson with Viracon chaired the insulating technical committee, which began with an update from Steve Marino from Vitro Architectural Glass about the “Understanding Reflective Solar Energy” document. Marino explained this document was generated based on information that came out in the industry related to how reflective soar energy can burn the siding on a home or building. The issue, he said, was that a lot of the information was coming out about this from the siding industry and was negative about glass and glazing in general. He noted that other groups, including the Insulating Glass Manufacturers Alliance (IGMA), have also been working on related activities. Marino said the document they’ve been working on will provide educational information and … possible design considerations about reflective energy concerns and possible outcomes. It will also have information on what could happen if there are instances of reflective solar energy. He said a ballot will be going out next week and anticipates having a document published by the Fall Conference.

Mitch Edwards with Guardian led a discussion about potential work on developing a document focused on unique insulating glass units (IGUs), which could include jumbo sizes, point-supported glass and vacuum insulting glass, among others. While the group is hoping to address considerations and limitations related to these products, it’s also a concern to not overlap the activities of other groups. Margaret Webb with IGMA, for example, pointed out that IGMA already has documents on VIG and is working on one for jumbo glass. This will be an area of possible conversations going forward to review how the two associations can combine efforts on these activities.

Edwards added that education will be an important area of focus, particularly given installation issues/concerns they’re seeing in the field.

Speaking of other activities between GANA/NGA and IGMA, the groups are also working on a document for the compatibility testing of glazing materials related to the performance of PIB in IGUs. Webb said the document has gone to ballot and some comments came back that are being reviewed, and once resolved a re-ballot will be issued.  Another joint document with IGMA on unsupported edges of IGUs has also gone to ballot and is hoped to be published within the next couple of months.

John Kent with the Insulating Glass certification Council (IGCC) provided an update on IGCC activities. These include development of interactive lab training, which is expected to start in July 2018. Another area of focus is a material fingerprint and specification, which would include a voluntary fingerprint process approved for sealants that would allow fabricators to compare what sealants are doing this year to last year. They will also consider doing the same thing for desiccant.

Kent said they’re also exploring the development and use of a rapid assessment chamber provisional certification, which he described as a leap into the unknown. This would allow them to make a decision on certification in about 14 days, rather than six months.

Webb also provided an update on the various IGMA activities. Within the Emerging Technologies & Innovation committee these efforts include the thermal stress research project, which involves development of models for IG. She said the modeling is almost complete and a draft standard is under development. She also said there is a proposal to re-write the windows product category rule into two documents (residential and commercial) for publication September 2020, though a final decision has not been made. Within the IGMA technical services committee some activities there include a new task group to look at glazing guidelines for VIG and also adding an update to TM-1500-14, “Design Considerations to Reduce Instances of Thermal Stress” that will add a section on ceramic frit to look at reducing thermal stress.

During the energy division meeting, codes consultant Tom Culp began with a report on energy codes and standards, providing a look at some things the industry needs to be aware of. He said that in ASHRAE 90.1 – 2016 the Department of Energy issued a positive determination that the 2016 edition reduces energy cost by 8.3 percent from the 2013 edition. He noted that all new federal buildings will have to use 2016 later this year and the 2018 I-codes will start to be adopted over the next few years.

Other ongoing work, he said will relate to thermal bridging in opaque areas. He said this affects the intersection between the wall and window. It will be important that these changes make sense to the glazing contractor because it does affect installation.

Culp added that attacks on window wall area will also continue to be a concern because the perception is still out there that a big glass building is an energy waster.

Culp said this is starting to come into the codes again; not as a direct attack on window-to-wall ratio, but  they are trying to put limits on the performance path to prevent construction of buildings that are  highly glazed—even if you show performance better than the prescriptive requirement for the 40 percent requirement for window-to-wall. He added they will be fighting this battle in June.

Mark Silverberg with Technoform, chair of the energy division, raised the discussion over California AB 262, which requires state agencies to consider the Global Warming Potential (GWP) of “eligible materials” in their sourcing, which includes flat glass. By January 1, 2019 the California Department of General Services (DGS) must establish a maximum acceptable GWP for each category of eligible materials. The DGS must set the maximum acceptable GWP at the industry average of facility specific GWP emissions for each material category. Silverberg explained that the DGS can set the industry average by consulting environmental product declarations (EPD), life cycle assessments (LCA) or EPDs that have had critical review.

The challenge for the glass industry is that an industry-wide EPD for flat glass currently doesn’t exist. Silverberg provided a look at the benefits of having an industry-wide EPD and why this would be important. Looking at the issue of California AB 262, Silverberg explained that if the industry chooses to do nothing, then California will calculate the industry average GWP with data from the published EPDs from only two flat glass manufacturers.

He stressed that if the flat glass industry doesn’t provide data, California will do it themselves, so the industry has no control on the data sources that contribute to their method.

A task group was created that will review these options and provide a recommendation for industry efforts going forward.

The Annual Conference continues this week through Thursday. Stay tuned to USGNN.com™ for more news and reports.