Texas Glass Association (TGA) president Felix Munson welcomed attendees to the show this morning. That was followed by an economic update from Debra Levy, publisher of USGlass magazine.

According to Levy, total construction starts in the U.S. have risen continuously since 2012, and that growth is forecasted to continue.

The commercial and residential sectors were both hit hard by the Great Recession, but data shows that these sectors will reach levels more robust than before the recession.

“When we talk to contract glaziers and ask what they expect for 2018, about 50 percent of them expect 10-percent growth,” said Levy. “In 2017, 59 percent of contract glaziers said they hired someone. Seventy-one percent expect to hire this year. That means more competition.”

Johnathan Granados, vice president of Curv Compliance, began his presentation, “Changes, Updates and What’s New That You Need to Know About Safety,” with an explanation of the new silica standard. 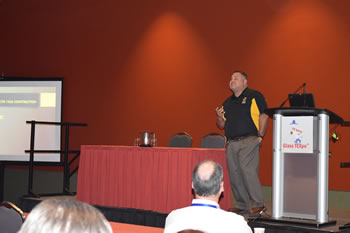 The standard applies to all occupational exposures to respirable crystalline silica in construction and general industry work, except where employee exposure will remain below 25 micrograms per cubic meter of air as an 8-hour time-weighted average.

“The dangerous thing about silica is that it’s microscopic and has little hooks that tear up the alveoli in the lungs which help us breathe, and could cause silicosis,” said Granados. “The silica standard has created a whole ripple effect in the industry.”

He also pointed out that slips, trips and falls are the leading accidents in the construction industry and second in fatalities to vehicle crashes.

“It only takes one time. We don’t know how we’ll come out of that situation until it happens. Until, that’s the word I want you to remember,” said Granados. “It makes no sense to work as hard as we do and lose it to one incident where we drop a ball. We have to focus on those ‘until moments’ and prepare for them.”

Slip hazards can be controlled by drying the jobsite when wet and cleaning the area of potential hazards.

Musculoskeletal disorder injuries are caused by repetitive, straining work. According to Granados, it’s important to modify a job to fit the capabilities of the personnel rather than setting workers up for failure.

“It’s the employer’s responsibility to assess the workplace for hazards, provide PPE, determine when and how to use PPE and provide PPE training and instruction on proper use,” said Granados. “It’s the employee’s responsibility to use PPE according to the training and instructions. It’s also important to inspect PPE daily and maintain it in a clean and reliable condition.” 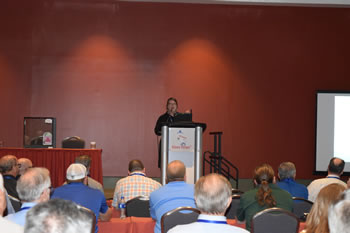 She continued, “We do know that these products mitigate hurricane damage.”

Hurricane Katrina caused $160 billion in damage, according to Schimmelpenningh. It caused the most financially costly damage of any hurricane. It’s followed by Hurricane Harvey, which caused $125 billion in damage when it caused major flooding in the Houston area last year.

“Hurricane Andrew is ready to fall out of the top five most devastating hurricanes. It’s hard to imagine, especially since the most recent hurricanes haven’t been at that same category 5 level,” said Schimmelpenningh. “Either the codes aren’t good enough or storms are hitting areas that have been grandfathered in. I believe it’s the latter.”

In recent reports conducted in Florida following Hurricane Irma, places that adopted newer codes and enforced hurricane-resistant products fared well, whereas areas that had not updated the codes, such as Key West, were devastated.

“This tells us that this is working to save people, properties and the whole community from having to deal with $160 billion of devastation,” said Schimmelpenningh.

Hurricane code requirements exists up and down the east coast and gulf coast, from Maine to Texas.

“The key is making sure there is enforcement. If areas aren’t enforcing the codes then it doesn’t always get put into play,” she said.

The benefits of using hurricane glazing, which is often made with laminated glass, is that it’s in place 24/7, with no need to install anything before the storm approaches. The glass requires no storage and provides impact protection and acoustical benefits.

Schimmelpenningh recommends that when using insulating glass units, the laminated glass be glazed to the inside of the unit to protect occupants from potential glass shards entering a space. 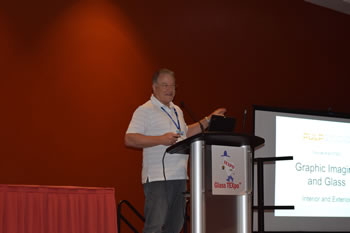 Ceramic ink is made of colored particles, a clear base and a flux which pulls the ceramic into the glass and embeds it. The benefits of screenprinting with ceramic ink is that it’s durable and cost effective for large projects with repeating patterns. Its limitations are color options, sizes and pattern variation.

“You’d have to make a screen for every pattern and one screen can cost up to $1,500, which isn’t cost effective for any project under 1,000 square feet,” said Lax.

He explained that when digital printing first started entering the glass world, people were excited about UV inks.

“They have nothing to do with UV stability. They are called that because the ink is stabilized and cured with UV light. The ink is actually less durable and will only last three to five years outside,” he said.

Lax said that the technology to create digital printing machines with ceramic ink has existed for around 25 years.

“It’s not new technology. Ceramics are little particles and you have to blow them through a nozzle. It can be very corrosive and tear up the nozzle. The machine technology existed, but it took the industry almost 20 years to develop the nozzle,” he said.

According to Lax, digital printing companies use a tedious process called profiling to anticipate the potential color differences in how an image looks on a monitor and how the color will appear on the glass.

The resolution of images on glass has improved with greater dots per inch (dpi), but using a higher dpi ratio takes more time.

“Printing constantly at a high dpi will put you out of business quick,” said Lax.

Printing on the interlayer creates a higher resolution image and makes it possible to create a true gradient with a more subtle transition than direct-to-glass printing, according to Lax.

“Remember that not every project lends itself to a single technology,” he said.

The TGA held a luncheon this afternoon to honor its members. Part of that event was the Lou Green award, which recognizes a member who has provided distinguished service to the organization. This year the award was given to Sam Hill of Oakcliff Mirror & Glass by Munson, who called Hill a stalwart of the industry. 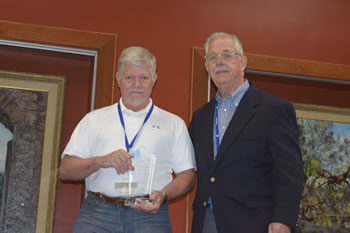 “I’m honored to have the opportunity to serve and do what I can,” said Hill. “I made a commitment to leave the industry better than when I came into it and I appreciate everyone’s support.

The luncheon was followed by a keynote speech by body language expert and author Janine Driver, who gave insightful body language tips to improve sales and strategic workplace skills.

The Show Floor and Looking Forward

The exhibition floor was open from 2 to 7 p.m. today, and will be open from 10 a.m. to 3 p.m. tomorrow, giving attendees and exhibitors the opportunity to network. Seminars will take place from 8 to 11 a.m. tomorrow as well. Those in the San Antonio area who are interested in getting in on the action can still stop by the Henry B. Gonzalez Convention Center to register for the event. More information is available at www.usglassmag.com/texpo.