Exhibitors at Glass TEXpo™ ’18 have all said the same thing: business is good, especially in the Texas market.

Glass TEXpo 2018 exhibitors are staying busy at the show in San Antonio.

“We’re looking to bring on an independent sales representative for the Texas region so we can do more business here,” said Bowser.

M3 Glass Technologies, a company with an interior focus, is based in Texas and plans to begin distributing to the Oklahoma market in June.

Many other exhibitors are also well-established in the Texas market and were focused on speaking with attendees about their latest products.

“A lot of our customers don’t know about it. It’s quicker and cleaner than creating unitized curtainwall manually,” he said.

Bailey Specialty Cranes & Aerials is reaching for new heights at TEXpo. Jack Garczynski, sales engineer, operated the Brandon 10, a crane which can reach up to 37 feet. He said the crane is ideal for atriums. The company also has a crane that can be used for inside out installations, including the installation of glass ceiling panels. Safety is another major focus at Bailey. 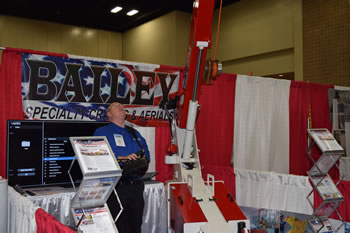 Jack Garczynski, sales engineer with Bailey Specialty Cranes & Aerials, operating the Brandon 10, which can reach up to 37 feet.

“The ANSI safety standards are becoming more rigid. Air-filled tires will no longer qualify under the standard. Our cranes are already prepared for this change,” said Garczynski.

Pilkington showed its MirroView, a one-way mirror for digital displays which is often used for hospitality applications. They also have a conductive glass product with no wires. The glass carries the circuit.

He said he’s noticed a trend of vans being used for glass transportation rather than enclosed bodies.

The company has a new product called Next Ledge, which can be placed on the bottom of a rack to create a secondary ledge to double the amount of glass that can be carried.

MyGlassTruck.com has a new shelf that allows people to lean a pane of glass against a van wall. It has rubber to protect the glass and could be used by a company that doesn’t need to transport glass often.

According to Joel Nudelman, account executive at MyGlassTruck.com, approximately 25 percent of the company’s business is in Texas.

Kuraray’s SentryGlas is well known in the industry, but Mark Jacobson, market manager, said the company wants to inform attendees about the hurricane benefits of SentryGlas.

He also said that the company has seen a rise in inquiries about security glass for schools.

“Glass is only one part of the solution. It has to be part of a whole security system,” said Jacobson.

“Glass is so beneficial for a learning environment. It can provide the security needed to help keep an intruder out while making sure students feel like they’re in a school and not a prison,” he said.