16 Associations Come Together in Italy to Strengthen Relationships, Share Information 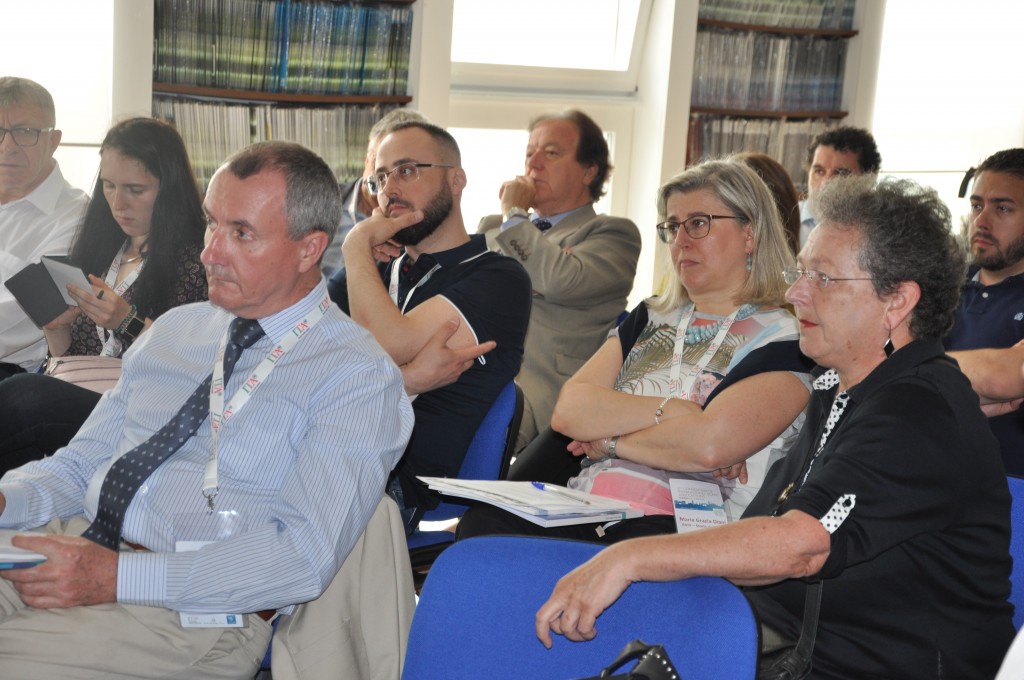 The goal of the Second Annual International Convention of Glass Industry Associations is to share knowledge and best practices to help each group overcome common challenges and help the glass industry as a whole.

Representatives from 16 professional glass groups from throughout the world gathered together late last week to discuss common challenges and share information during the Second Annual International Convention of Glass Industry Associations in Murano, Venice, Italy. Three new associations joined the meeting’s ranks this year — Abravidro (The Brazilian Association of Flat Glass), The Finnish Association of Flat Glass and FunGlass (The Centre for Functional and Surface Functionalized Glass) based in Trenčín, Slovakia.

The event was organized by Vitrum and supported by the Italian Trade Agency (ITA). Associations from 11 countries were represented, including Australia, Belgium, Brazil, Finland, the United Kingdom, Russia, Slovakia, Spain, Germany, Switzerland and Italy. 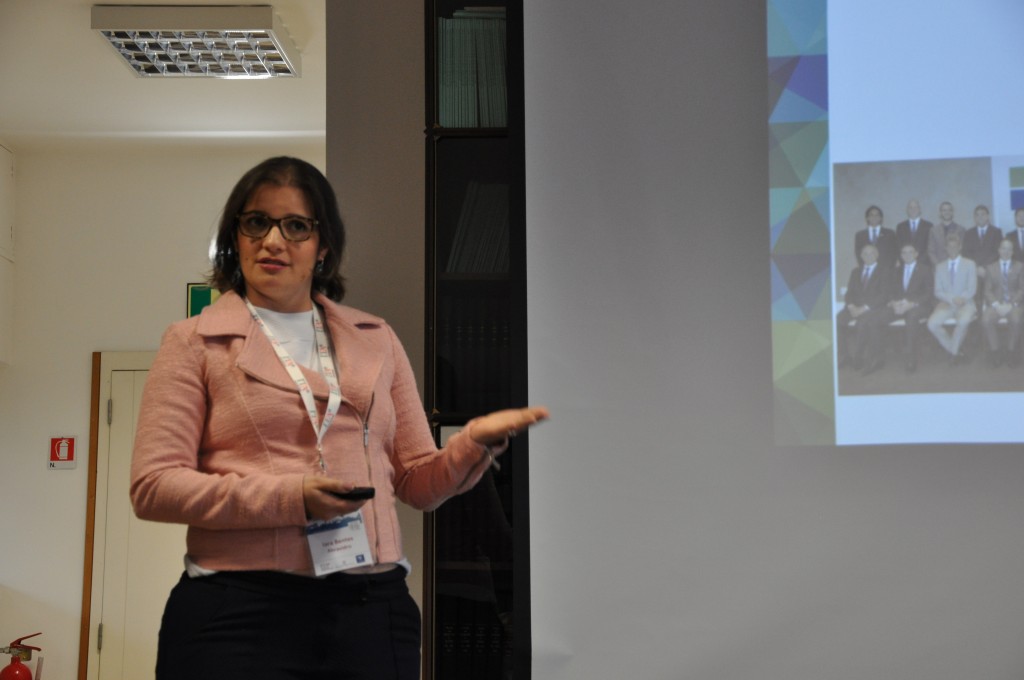 Iara Bentes of Abravidro discusses the state of the glass industry in Brazil.

The event began with introductions from representatives of new associations. Iara Bentes represented Abravidro, one of the largest glass associations in Brazil, which includes almost 200 glass companies. The group covers the entire gamut of glass from construction to automotive to furniture, decorative and major appliances. Since 1998, Abravidro hosts the Brazilian Committee for Technical Standards (ABNT/CB-37), which is responsible for the production and revision of the technical standards for the sector.

In addition to offering education initiatives and legislative support, Abravidro also publishes an annual report analyzing the Brazilian flat glass sector. Tempered glass is the most popular glass product in Brazil, followed by mirrors, laminated, table top glass and insulating glass. The revenues of tempered glass are down almost 3 percent from 2016 to 2017, while laminated glass revenues are down 18 percent.

“Pricing is going down,” noted Bentes. “The crisis is hurting the construction sector.”

The crisis she referred to was sparked by the investigation into a massive government bribery ring which fed into an economic downturn as Brazil prepared to host the 2016 Summer Olympics in Rio de Janeiro. Politicians, billionaires and corporate executives have been jailed, according to CNN.

However, Bentes, noted that employee numbers at glass companies are on the upturn. This points to a more positive future, she said. 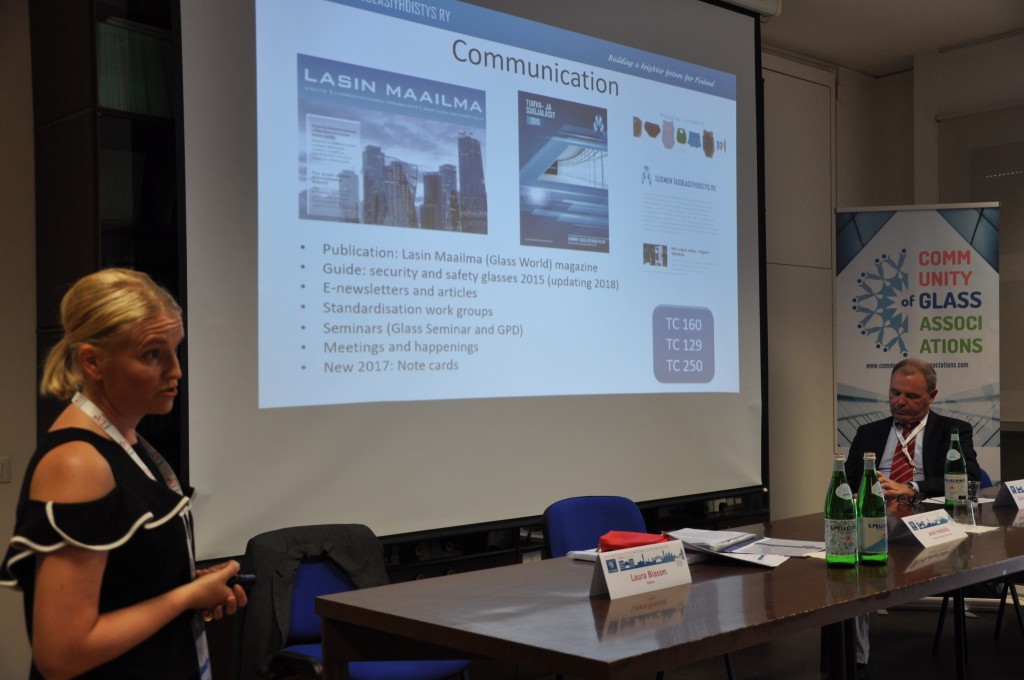 Jenni Heikkila of the Finish Association of Flat Glass discusses her group’s recent initiative to introduce a glass design software to the Finnish market.

Jenni Heikkila took the stage next representing the Finnish Association of Flat Glass, which was established in 1997. It has 130 member companies and its main goals are to raise the quality of glass in building construction, as well as influence legislation, standards and guides. One of the group’s recent initiatives was introducing a glass design software to the Finnish market as no software was available. The Finnish group has been working closely with Norway and Sweden. They share information since the regulations and laws are similar in their countries. She pointed out that her group is interested in learning about the standards established by other countries and sees education as a growing part of her association.

The third new association to present was FunGlass (The Centre for Functional and Surface Functionalized Glass). It represents 40 researchers from Slovakia, Spain, Germany and Italy. Martin Michalek represented this group. It is a project supported by the Eighth European Framework program for Research and Innovation Horizon 2020. Their goal is to create an advanced glass center that promotes guidelines and advancements. The new center will specialize in research in the area of glasses with special functional properties (luminescence and electric), and to the functionalization of conventional glasses with the aim of modification of their properties and adding new functionalities. These would comprise reflection and anti-reflection coatings for solar energy production and optoelectronic applications, increase of glass strength, enhancing the corrosion and leaching resistance of commercially produced glasses and low-maintenance/antibacterial coatings of glasses for medical applications, including modification/enhancement of bioactivity.

Other groups that participated were the Australian Glass and Glazing Association, AIHV (which represents a European coalition of countries and also has a board member from the United States), Storia Del Vetro ( the Italian National AIHV Committee), GIMAV (based in Milan, Italy), Glass for Europe (based in Brussels, Belgium), Glass and Glazing Federation (based in London, England), The International Council of Museums (based in Paris, France), the International Commission on Glass (which represents an international coalition of countries), the Slovak Glass Society (based in Slovakia), the National United Council of Glass Industry (based in Russia), ATIV (based in Parma, Italy), Assovetro (based in Rome, Italy) and The Mechanical Engineering Industry Association (based in Frankfurt, Germany).

The groups established committees on several key topics, including technical and production standardization, education and training, history and culture, and energy and environmental stewardship. The goal is to share knowledge and best practices to help each group overcome common challenges and help the glass industry as a whole.

“If someone has done it before, why do we have to keep reproducing it over and over again with limited resources,” asked Dino Zandonella Necca, president of Vitrum, suggesting a pooling of knowledge. Members of the group will meet again at glasstec in October 2018 to further develop the committees. The groups were also in favor of continuing an annual meeting of associations in Murano, Venice, Italy.