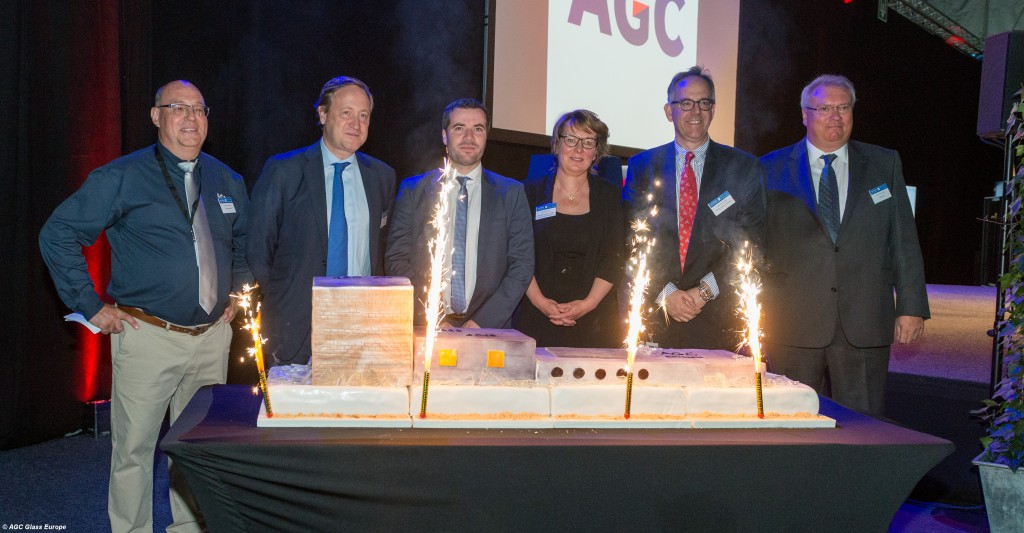 AGC management and local officials celebrate the 120th anniversary of the Boussois float glass plant with a cake in the form of a complete float line.
Photo: Tom Vandewiele

AGC Glass Europe’s Boussois float glass plant in northern France celebrated 120 years of operation on Friday, June 1, 2018. The ceremony was attended by district sub-prefect Alexander Grimaud and numerous political and industry representatives. The event featured a cake measuring 180 cm by 40 cm in the form of a complete float line.

The plant is now the largest French producer of flat glass, with two float lines and a total capacity of more than 1,300 tonnes per day. Employing approximately 230 people, it specializes in production of clear glass (Planibel Clearlite) and glass with high light transmission (Planibel Clearvision) for the construction industry and the indoor furnishings market. The plant recently distinguished itself with production of XXL glass sheets having an outsize length of approximately 52.5 feet.

Apart from these products, the plant previously demonstrated its innovative capabilities in 2008 when it was the first in the world to introduce oxycombustion1 into its process, with the combustion gas pre-heated by heat recovered from the flue gases. This system led to a reduction in energy consumption by around 25 percent along with significant reductions in atmospheric emissions: 15 percent less carbon dioxide, 38 percent less sulphur dioxide and 83 percent less nitrogen oxides, making it one of the most ecological in the world, according to the company.