Prop 65 Changes in California: What You Need to Know

In August 2016, the California Office of Administrative Law approved changes to California’s Proposition 65, also known as the Safe Drinking Water and Toxic Enforcement Act of 1986. These changes take effect on August 30, 2018, and they could affect how companies do business in the state, said Kevin Mayer, a Los Angeles-based lawyer with the firm of Crowell & Moring.

Mayer outlined these changes during a presentation at the recent Window and Door Manufacturers Association (WDMA) Technical and Manufacturing Conference in Minneapolis.

According to Mayer, as of now, these new regulations don’t seem to apply to doors and windows, though products used in their production could be affected. Despite that, he said it’s important for manufacturers who sell products in California to know as much as they can about the changes, which are significantly different from the rules that businesses have used for decades to inform Californians about exposures to harmful chemicals.
Mayer opened his presentation by reviewing the regulation’s history. The law, which began as a voter initiative in 1986, is administered by the Office of Environmental Health Hazard Assessment (OEHHA). It’s based on a list of more than 900 chemicals that are known to cause cancer, birth defects or other reproductive harm.

Prop 65 covers goods sold into California and businesses based in California. Companies with fewer than 10 employees are exempt from the law. While it doesn’t ban any products or activities, it does require “clear and reasonable warnings,” and it’s not superseded by any federal regulations. The warning labels must be prominently displayed if products or facilities can expose consumers to chemicals on the list that are present above a certain threshold. It’s enforced by the California attorney general and district attorneys, who are often aided by “bounty hunters.” These are citizens or organizations that search out potential violators.

The penalties for non-compliance are stiff, Mayer said. The fines are $2,500 per day, per violation. Between 2000 and 2017, more than $300 million was paid in Prop 65 settlements, Mayer said. However, the state has collected just 15 percent of the total settlement money, on average. About 85 percent goes to bounty hunters and their attorneys.

Mayer said the regulations provide “safe harbors” in the threshold levels of exposure and the warning labels. (OEHHA has tested and developed safe-harbor exposure levels for hundreds of chemicals.) He then described the “three Ws” of Prop 65 compliance:

According to Mayer, warnings are required for “any exposure that results from a person’s acquisition, purchase, storage, consumption, or other reasonably foreseeable use of a consumer good, or any exposure that results from receiving a consumer service.” The warning label must be “prominently placed on product label or other labeling with such conspicuousness, as compared with other words, statements, designs, or devices on the label, as to render it likely to be read and understood by an ordinary individual under customary conditions of purchase and use.”

Updates to the warning label requirements are among the major changes to Prop 65 that take effect on August 30, Mayer said.

For example, the type size for the warning label shall be no smaller than the largest type size used for other consumer information on the product, and it cannot be smaller than 6-point type. It must include the word “WARNING ” in bold caps, along with a picture of an exclamation point in a triangle filled in yellow. If yellow is not a color elsewhere, black and white is fine. The exclamation symbol is placed to the left of the text of the warning, in a size no smaller than the height of the word “ WARNING.”

The new safe-harbor provisions also change the language that’s used in the warnings. For example, the phrase “this product contains” is being replaced by “this product can expose you to x.” Previously, there was no need to identify the hazardous chemical or chemicals present in the product. Now, they must be named. Mayer shared an example of what the new warning labels could look like: 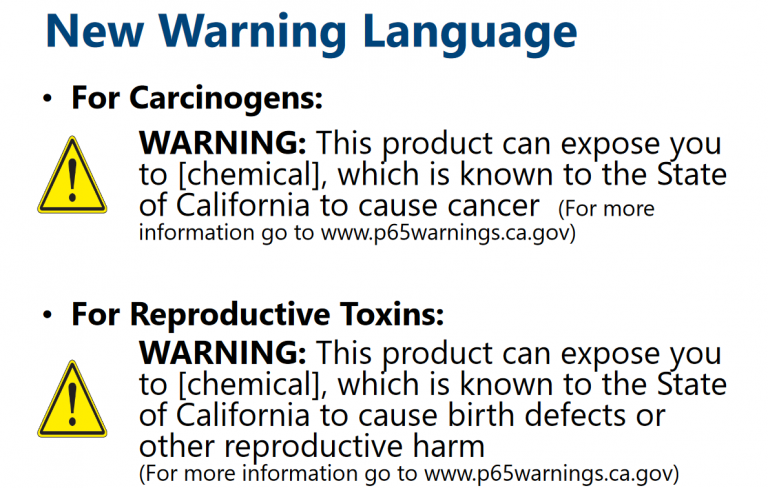 Mayer added that companies can avoid listing specific chemicals, but they must use these warnings instead:

Brick and mortar stores must incorporate warnings, too, as well as internet sellers.
Mayer noted that businesses are under no obligation to use the safe harbor warnings as long as they can prove that they are using a “clear and reasonable” alternative, but he said he definitely recommends that they use the suggested warnings to protect themselves from enforcement actions.

Mayer urged companies to do a Prop 65 “audit” and know their risks. That could include an exposure evaluation, and they should manage and reduce exposures as needed. Most importantly, they should review their current warnings and plan to change to preserve their safe-harbor protections.