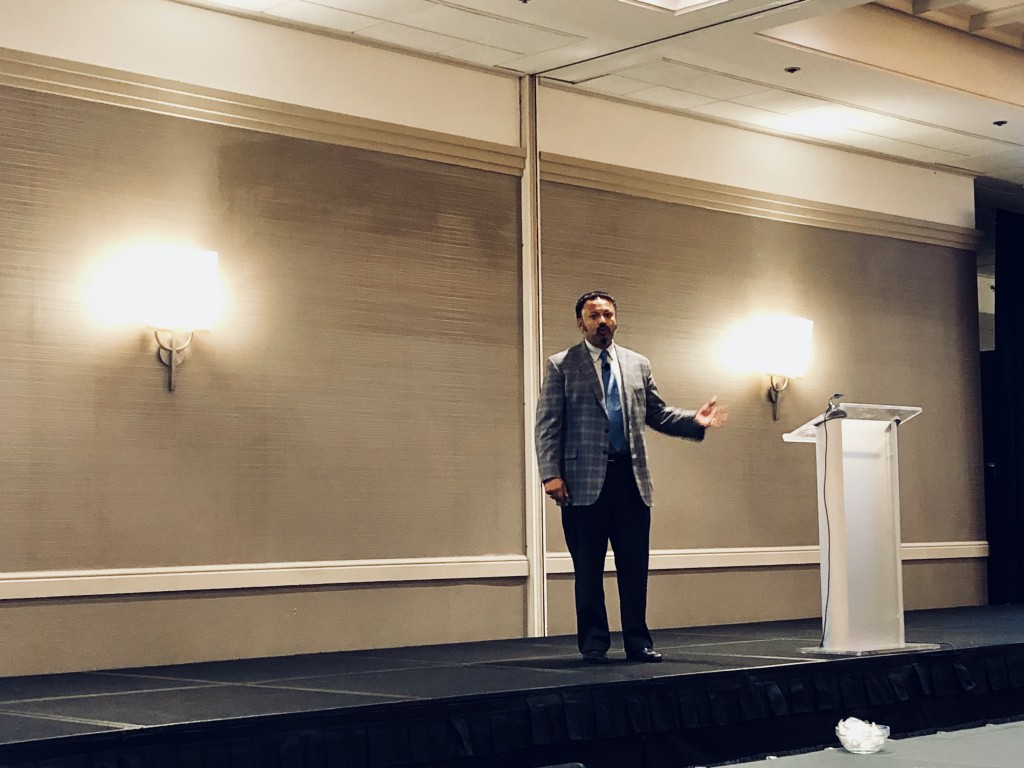 Anirban Basu of Sage Policy Group discusses the state of the economy.

The state of the construction economy and “Industry 4.0” were two hot topics at GlassCon Global, sponsored by Finishing Contractors Association (FCA) International, this week in Chicago.

During the event, economist Anirban Basu of Sage Policy Group gave an update on the state of the economy, how construction is faring and where it is headed. Basu said that despite being in its tenth year of growth, the economic expansion is actually broadening.

“There’s a level of dynamism in the economy that we’ve not seen since [the start of the recovery in] 2009, according to many measures,” he said.

Basu pointed out that the consumer has done the heavy lifting, as consumer spending growth has represented about three quarters of all economic growth. As for employment, there is more than one job available for every unemployed American.

Construction in particular has added 308,000 jobs from July 2017 to July 2018. One thing to note, he said, is that average and median wages in the industry haven’t gone up much, an indication that while jobs are being added at a fast rate, highly skilled, higher-compensated workers are being replaced by younger, lower-compensated workers.

The largest construction job growth has primarily been in large metropolitan areas in Southern states, with Dallas a prime example.

Meanwhile, the American Institute of Architects’ Architectural Billings Index is on a many-months winning streak. Architects continue to report that they’re busier each month than they were the previous month.

Looking at national nonresidential construction spending over the last three years, lodging has lead the way with 39.9-percent growth, followed by commercial (38.8 percent) and office (29.5 percent).

“A lot of money has flowed into our equity markets from abroad,” Basu said. “But there’s something else at work. A lot of money is going into commercial and multifamily real estate.” He noted that New York City was again by far the top destination market in 2017 for foreign investment in U.S. commercial real estate, and that this money is almost always centralized to large metropolitan markets.

In terms of the forecast, Basu said he’s concerned about inflation. “Over last year, construction material prices are up 9.5 percent,” he said.

“In some sense I think things are too good,” Basu added about the economy. “… People have a tendency to do foolish things when they’re too confident.”

Consumer debt is rising quickly, and according to the International Institute of Finance, global debt reached an all-time high in 2016 and continues up. He concluded by saying 2019 might be fine, but beyond that, there may be a “potential deleveraging cycle prompted by a repricing of assets.”

Also on Thursday, Nick Bagatelos of Bagatelos Architectural Glazing Systems gave a keynote presentation on innovation and what he dubbed “the factory of the future.”

Bagatelos discussed the ways his company has implemented technology and systems over the past decade to improve efficiencies, reduce waste and win jobs that others couldn’t or weren’t willing to take on.

“The idea of innovation isn’t easy, because many people are afraid of change,” he said.

Bagatelos discussed how automation and new technology is going to have a major impact on industries such as trucking, and how they will also affect construction and manufacturing.

“The disruption is going to create a lot of opportunity for us,” he said. “… It’s going to push communications deeper into the supply chain.”

He gave a variety of examples of how technologies such as virtual reality can result in faster training of new employees, and that the young generation will be easy adopters of this because they grew up with technology.