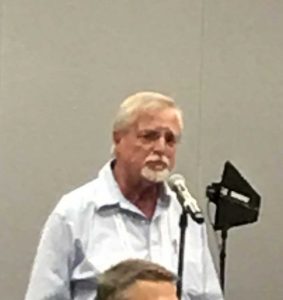 Using a variation of the old rhetorical question, Julia Schimmelpenningh explained how the integration of the Glass Association of North America (GANA) and the National Glass Association (NGA) is going. “Sometimes the duck looks pretty still on the open water,” she told attendees at the Fall Conference yesterday “but, in reality, it’s peddling as fast as it can underneath.”

“Some people might not think there is a lot going on,” Schimmelpenningh said, “but there is. You just can’t see it yet.”

The session about integration was one of a number held yesterday as part of the former GANA Fall Conference appended to the GlassBuild show.  The show opened at the Las Vegas Convention Center today.

Schimmelpenningh reported on the work of the Integration Task Force and detailed the structure of the newly merged organization, as well as the many changes to voting and other procedures. The association is now divided into four committees: Forming (for the primary glass manufacturers), fabricating and installing. The Glazing Industry Codes Committee serves the advocacy function.

This update was followed by reviews of the top challenges for each fabrication group (decorative, mirror, insulating, laminating, fire-rated, protective glazing and tempering) within the Fabricator Committee. Much of the work coming to fruition is the result of work begun by GANA’s former committees. Among the highlights:

–Insulating chair Jeff Haberer of Trulite and Margaret Webb of the Insulating Glass Manufacturers Alliance reported that a joint document about unsupported IG edges is completed and ready for publication.

–John Kent provided an SGCC update during the laminating report which include an interesting segue into his groups’ work on developing “fingerprints” for sealants. “When you have a fingerprint, you can check to see if something has changed,” he said. There are also more desiccant manufacturers now than in years past yet, he said, yet there are no standards for desiccants. They might lend themselves to being fingerprinted.

–The advent and expected advancement of “active shooter codes” as a deterrent to shooters was also discussed. Expect to see major new code language in this year.
“Active shooter codes are coming and they will have a major effect on glass used in the exterior of buildings—and not just in schools,” said codes consultant Thom Zaremba of Roetzel & Andress.

–The International Green Code has now been absorbed into the ASHRAE green code, resulting in one code that goes by a few different names depending on whether it is being cited domestically or internationally.

Thom Zaremba also reported on fire code changes during the fire rated glazing group report.  He also mentioned how glass used in the walls of energy storage facilities with need to be fire-resistant. The storage of used but still active lithium batteries is the overriding reason for this requirement.

“There are a lot of changes coming,” added Zaremba. “The codes are looking at allowing 18 story all wood structures that use a product that I am told is as safe as steel. We will see,” he said.

–The laminated group reported that the laminated reference manual is now undergoing staff review. The group has also been studying displacement caused by the compression of interlayer—and seeing minimal displacement at this point with laminated doors having slightly more displacement. The group will need to decide if further testing is necessary.