The Age of Automation: Machinery Solutions for Increased Production, Safety and Efficiency 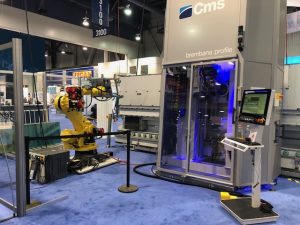 A number of machinery exhibitors, such as CMS, are highlighting solutions in automation to help increase productivity, safety and reduce costs.

Automation was a buzzword during this year’s GlassBuild America show, with many companies—particularly those on the equipment and machinery side—focused on solutions that can help reduce labor and increase productivity.

Jacqueline Liger with Italian equipment manufacturer Intermac said her company’s focus has been on automation and how they can help customers save labor, time, space and cost. Not only is the company automating processes on their cutting tables and handling, but also recently introduced the Parts Sophia software platform for ordering parts, checking availability and tracking purchases 24/7. The program allows customers to view a schematic of the machine that provides a breakdown of the exact parts needed. The company will also launch its Internet of Things Sophia platform during glasstec that will provide production connectivity between both the customer and the machine supplier.

Adelio Lattuada, which is celebrating its 40th anniversary this year, as well as one year of operations in North America, is also highlighting the move toward automation and their robotic solutions. The company offers robotic options as part of its edging and washing lines that can assist in increasing productivity, operator safety and also providing cost reductions. According to Michela Lattuada, communications manager, these options aren’t just for large companies, but can also be a solution for smaller fabricators as well.

Lattuada added that the company has had a successful first year in North America. The warehouse is fully stocked with parts, and technical assistance is coming directly from the U.S. rather than Italy.

Automation continues to be the big focus for Mappi, who is also celebrating an anniversary—25 years. The company was promoting its Mappi ATS 4.0 tempering solutions that connect them, as the machinery supplier, to their customers to help aid in areas such as production and service.

Mappi is also continuing to increase their North American presence, according to company owner Nancy Mammaro, who added that many customers are now adding on additional lines to their operations.

A new Neptun vertical washing machine was on display in the Matodi booth. Matteo Rolla, Neptun managing director, described it as an intelligent machine. The line, for example, can be programmed to start at a certain time so that it’s ready to begin when the operator starts each day.

“It takes the operator out of the equation,” said John Lloyd, vice president of Matodi, the U.S. distributor for Neptun.

Matodi was also highlighting the Immmes water treatment system, which Lloyd said is completely closed loop, from the system to the machine and back to the system. It can be used with any machine that needs water.

GlassBuild America concludes today in Las Vegas. Stay tuned to usglassmag.com for more news and reports from the show.