In August 2017, Guardian Industries approved the investment for an additional float and coated glass manufacturing plant in Czestochowa, to meet the growing demand for float, coated and fabricated glass products across Europe. The new facility location is adjacent to the company’s existing plant. 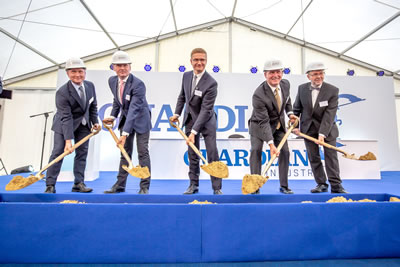 “We are excited about the growth we’ve seen in Poland — and confident that the Częstochowa location is well positioned to meet our customer’s needs,” said Kevin Baird, Guardian Glass president and CEO. “We’ve enjoyed strong support from the city of Częstochowa, the Katowice Special Economic Zone and the Polish government.”

“I would like to thank very much for the trust of the Guardian Glass management. Guardian is not only a large employer, but also a particularly valuable partner in the region,” said Matyjaszczyk. “It is very important that Guardian Glass expands its activity in Częstochowa and creates new jobs for qualified specialists. Częstochowa is a very good location for production and services, and thanks to such investments, the attractiveness and credibility of Częstochowa as a business center increases particularly.”

“Further evidence of our commitment to Poland is that our existing float line in Częstochowa just went through a repair project, which increases its production capacity by around 25 percent,” added Guus Boekhoudt, vice president of Guardian Glass in Europe.

“With both furnaces, we are tripling production. To give you an idea of the sheer size of this project, in the future, we will be able to produce 60 km of glass per day – producing enough glass in four days to build a glass road from Częstochowa to Warsaw.”

The new facility is expected to begin operations in early 2020, and will create more than 150 new jobs. Combined, the two facilities will create a competitive, efficient structure to deliver a wide range of glass products and will generate long-term value for our customers in the region, according to the announcement.