With 1,280 exhibitors, glasstec in Düsseldorf, Germany, is one of the biggest glass shows globally, so it’s no wonder companies use the event as a launching pad for their latest and most innovative products.

Bostik has improved upon its hot-melt butyl secondary sealant with the addition of i-Boost technology. The company debuted its Bostik 6000 sealant for the European market at glasstec. The sealant is suited for high-speed automated lines, allowing for quicker application compared to the company’s Bostik 5000 sealant. It also provides improved heat resistance, moisture barrier properties and gas retention. The i-Boost technology improves its durability over the lifetime of the product. It actively resists the effects of stress, such as aging, to perform better over time.

The Bostik 6000 sealant is meant to have a better synergy with warm-edge spacers, according to Olivier Bousquet, business development manager for building components at Bostik. 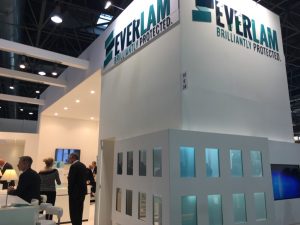 Everlam is promoting its polyvinyl butyral (PVB) products at glasstec. The company was created in 2015 from DuPont’s sale of its PVB division, and is promoting the new research and innovation combined with its established PVB products. A new addition to the product line is Everlam Cool, which gives laminated safety glass increased thermal performance. Everlam Super Tough, the company’s stiff safety PVB, is undergoing hurricane impact testing, according to Peter Kater, sales development manager for North America at Everlam.

German software company A+W is focused on internet of things (IoT), automation and smartphone integration at glasstec. The company’s iShape app allows users to photograph a template with a tablet or smartphone, which is then digitized and ready to be produced. 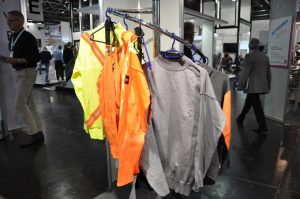 Tuff-N-Lite has seen an increased demand for high-reflectivity PPE.

Tuff-N-Lite’s personal protective equipment is made from composites, which provide cut resistance and are less heavy and hot than Kevlar, according to Walter Schulein, Northeast market manager. The company has noticed an increased demand for high-visibility and reflectivity garments. It embed LED lights in some of its apparel to provide added visibility on the factory floor. Another major trend for Tuff-N-Lite has been the demand for its cool mesh back shirts, which are breathable. As the company works to constantly innovate, it is looking into ideas such as embedded GPS abilities.

glasstec runs until Friday, October 26 at Messe Düsseldorf. Stay tuned to USGNN™ for coverage of the event throughout the week.

This entry was posted in Featured News, News, Today's News and tagged glasstec. Bookmark the permalink.