The economy in the Midwest, graphic imaging and glass and glazing industry trends were some of the hot topics discussed at this morning’s seminars at Glass Expo Midwest™ (GEMS) ʼ18. The event opened today at the JW Marriott Indianapolis in downtown Indianapolis.

After a welcome from USGlass magazine publisher Debra Levy, the educational program began with a series of insightful seminars. 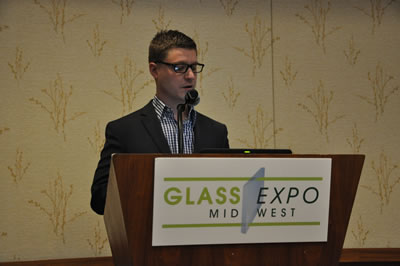 Nick St. Denis, director of research for Key Media & Research, tells attendees that sales were a mixed bag for firms in the Midwest, but more positive than negative.

While the Associated Builders and Contractors’ Construction Backlog Indicator was at its highest-ever point in the second quarter of 2018, the Midwest was the only area to shop a drop.

The Midwest reflects the overall national trend of having trouble finding labor. St. Denis asked glazing contractors their biggest concerns and the skilled labor shortage ranked highest on their list, followed by competitors that don’t know their costs/bidding. When asked how much of an impact the skilled labor shortage has had, 48 percent of glazing contractors said it’s had a big effect while 41 percent reported it having a minor effect.

However, that isn’t expected to have a negative impact on sales. No U.S. glass fabricator or manufacturer surveyed reported expecting a decrease in sales in 2018 compared to 2017. Midwestern firms are reporting a mix of sales, though the numbers are more positive than negative. The region’s growth is flattening faster than the rest of the nation.

As the demand for larger glass sizes continues, driven by both architects and glass manufacturers, it will impact facilities and logistics such as facility space, storage, handling and transportation.

The demand for higher-quality aesthetics, energy code stringency and increased use of decorative glass are also major industry trends.

St. Denis also highlighted national trends and industry analysis. He said the rebound in the residential building sector has been driven by multi-family housing. The multi-family segment is expected to settle back. While single-family housing is starting to boom, housing affordability is a major headwind because many people are still renting due to high housing costs.

Bernard Lax, CEO of Pulp Studio, led a seminar called, “Decorative Glass: Benefiting from Graphic Imaging (1AIA LU),” in which he explained the different types of graphic imaging production methods and their different benefits and limitations. 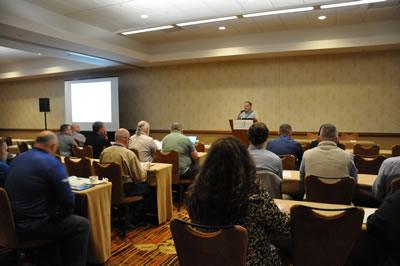 One of his major points was that there’s not one method that is ideal for all applications, so it’s important to understand the differences between methods such as ceramic screen printing, printing on the interlayer, digital printing with ceramic inks and digital surface treatments.

Lax also emphasized that it’s important for companies doing graphic imaging to keep a profile for each particular graphic on each substrate used to achieve the correct color match when using the digital printing with ceramic inks method.

Trends in the Glass & Glazing Industry

The glass and glazing industry is evolving constantly, but there are certain trends that are having a bigger impact on the industry. Consulting Collaborative CEO Richard Voreis gave an overview of various changes and trends. He said, “While companies vary in terms of locations, one of the surprising things is the challenges are pretty much the same from locality to locality from company to company.” 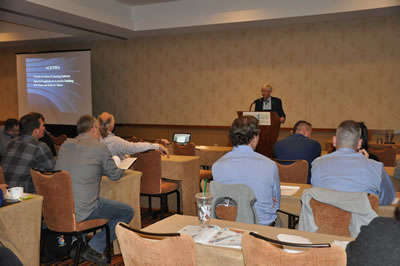 Richard Voreis, CEO of Consulting Collaborative, says that companies need to change and adapt to new technology or they will be left behind.

This observation is the same no matter the company size. Change is important for a company’s success.

One change Voreis foresees is a shift toward the materials of tomorrow such as silica and alumina aerogels, carbon nanotubes, aluminum metal foam, bamboo and advanced pour and debridge thermal breaks. According to Voreis, high-density polyurethane foam cores for commercial doors and windows provide the lowest conductivity of any thermal barrier system with a .21 U-value.

Aluminum had 62 percent of the market share in the residential market in the 1980s. In 2017 that shrunk to only 8 percent because of the rise of vinyl since residential windows require fewer structural considerations and Energy Star increased its focus on thermal performance.

The trend is not the same in the non-residential market. Aluminum’s market share was 85 percent in the 1980s and was 84 percent in 2017 because of the structural considerations required.

Voreis explained that green building and sustainability are not going away. As the U.S. Department of Energy (DOE) prioritizes energy efficiency there will be a greater emphasis on dynamic solar control, advanced smart façade systems, durability and life-cycle assessments.

A major area he said contract glaziers should capitalize on is building integrated photovoltaics (BIPV). Voreis said the DOE estimates BIPV and building applied photovoltaics have the potential to generate up to half of electricity needed in the U.S.

Another major trend is unitized curtainwall, in part driven by the labor shortage in the contract glazing field. The use of the unitized method increases with the number of stories.

A big takeaway from Voreis’ presentation is the need for change and technology adaptation such as building information modeling (BIM), which could attract younger employees.

While there is a decline in trade unions, apprentice training and young people entering the construction industry, the labor outlook can be improved through the development of training programs, speaking at high schools and universities and creating interest in the industry.

Stay tuned to USGNN.com™ throughout the week for more coverage of the event. GEMS runs through Friday, November 9. Those in the area can still register on-site.