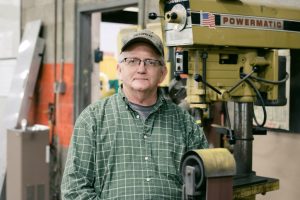 Bobby Hart has retired from Billco’s Washer Assembly department after 44 years in the industry. He started at the company the day after his 18th birthday and did general labor in the shop—running errands, sweeping floors or doing whatever it was that was needed.

From memory, Hart recalls that he started at the wage of $3.12/hour. After about a year doing general labor, he moved into assembly and that is where he spent his entire career at Billco. In Billco’s 70-year lifespan, Hart has seen, built and witnessed many Billco’s historical events, according to the company.

“It is his attention to quality that he will be remembered by. He’s trained many people at Billco and trained them well, according to many. Although he is looking forward to his retirement, he will miss his friends, noting that many of them are closer than family to him,” reads a company statement.

Hart says he will likely find a part-time position doing something else that he enjoys.

“Bobby Hart is a part of Billco as much as Billco is a part of him. We are honored that he chose to spend his career at Billco and wish him all the best in his retirement,” reads a company statement.

This entry was posted in News, Today's News and tagged billco. Bookmark the permalink.