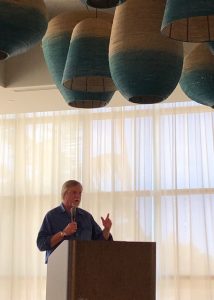 Thom Zaremba gave some updates on the activities of the Glazing Industry Code Committee. 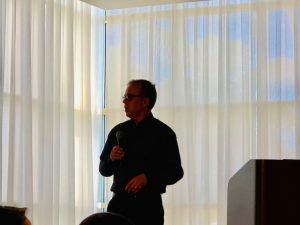 Code changes and updates were a big discussion topic during this year’s Annual Conference. During the event, which has been underway this week at the Naples Grande Beach Resort, code consultants Tom Culp and Thom Zaremba, provided an update on recent code changes that affect the glass, glazing and fenestration industries.

Culp began by explaining that there has been a big update to commercial fenestration requirements to ASHRAE 90.1, which has been voted for publication. He said they will continue to push for improved framing, warm edge spacers, argon gas fill and fourth surface low-E coatings, while still being cost effective and practical, without reduction to window area.

He said there was a 5-17 percent reduction in U-factor only, and only modest reductions in solar heat gain coefficient. Culp added that the 90.1 product categories will match the International Energy Conservation Code (IECC) without regard to material type.

He also noted that proposals for trade off limits and thermal bridging will not be in 90.1-2019, but are still being worked on. Culp cautioned we need to be careful about trade off limits due to potential impact in window area. He explained that trade offs could put limits on the building envelope.

Speaking of ASHRAE 189.1/International Green Construction Code, Culp said they are close to approving proposals for minimum views in offices, classrooms and patient rooms. He said they had tried to get this through the last cycle, but it was a little too aggressive, and has since been reduced some. He said this will likely be approved for public review next month.

Culp also provided an update on the Canadian Minimum Energy Performance Standard (MEPS). He said Natural Resources Canada is proposing to regulate residential windows under MEPS, like with appliances and equipment. One important distinction, he said, is that the building owner is liable for meeting building codes, but the manufacturer is directly liable for any products sold that are regulated by MEPS. Culp explained that the discussion document proposes very aggressive aspirational targets.

Regarding the IECC, Culp noted they also submitted four proposals here. One proposed aligning the IECC commercial fenestration values with ASHRAE 90.1; another proposed clarifying area-weighted averaging in the commercial energy code. This, he said would help clarify compliance for overall facades, such as curtainwalls. In addition, the other two proposals would update the requirements for walk-in coolers and freezers to help ensure vacuum insulating glass can be used in the door glazing.

Zaremba continued the codes discussion, with a focus on some of the Glazing Industry Code Committee’s activities. He said that in 2018 the ICC passed massive changes to the International Building Code that will permit all wood support structures in buildings up to 18 stories.

“What we’ll see is a significant shift in the design and aesthetics in tall buildings,” he said, adding that windows will fit in even better because they won’t just be for views out of the building, but also for viewing in the building.

“We’ll see a dynamic shift in the next decade in tall wooden buildings,” he said. “ … A shift in aesthetics involving glass inside and out because of the [move] toward tall wood buildings.”

Zaremba also said they have been successful against efforts by the sprinkler industry that could have impacted not only the use of fire-rated glazing, but also other building materials. The code language would have allowed the use of automatic suppression devices instead of fire-resistance rated construction materials in some applications.

Guards and handrails continue to be a work in progress, as well, as there are efforts to get the language used consistent with the rest of the code.

Canada is starting to move toward a brand new safety glazing standard that’s closely modeled after ANSI Z 97.1. It’s been approved by the Canadian standards organization, and now the NBC is re-writing provisions on what is a hazardous location, where to use safety glazing, etc.