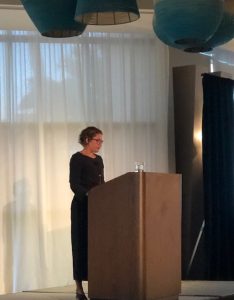 Lisa Ramming with Eckersely O’Callghan spoke this morning during the Annual Conference about the increasing demand for transparency in architectural designs.

Transparency was a big discussion topic during the 2019 Annual Conference today. The event is taking place this week at the Naples Grande Beach Resort in Naples, Fla., and opened with a presentation from Lisa Ramming with Eckersley O’Callaghan (EOC) who discussed a variety of design possibilities, trends and aesthetics, including an increasing drive toward more and more transparency.

As an example, she pointed to the 5th Avenue Apple Cube in New York, which was originally constructed with 105 panels of glass, then later re-built with just 15 to provide a more transparent, uninterrupted aesthetic.

She further discussed the impact that the evolution of glass technology has had on EOC’s work. For example, designs have advanced from glass installations being held together with metal fittings, to larger and larger panels of glass held together without. The Steve Jobs Theatre is such a project. It was constructed with 44 glass panels forming a circle of 180 feet with a carbon fiber roof. The roof is held solely by the glass, creating a completely column free space.

While Apple has been a big supporter and user of structural glazing applications, it all began, she said, with the first glass staircase, which was installed at the Soho store in New York. Ramming explained this came about because Steve Jobs wanted to be able to see the products in the space without being interrupted by a structure. These staircases have since evolved from bolted connections, to the laminated versions that are being built today.

“The fittings impact the transparency quite heavily,” she said, explaining that they’re doing a lot of research with universities on a variety of topics related to glass that they want to explore.

One of the best opportunities to continue these research efforts, she said, is through the glass technology live (gtl) exhibition that takes place as part of glasstec. EOC was involved with several innovative gtl displays, including the glass slide in 2016 and the see-saw in 2018, which was constructed with 11 layers of glass that weighed 1.3 tons.

Some of the focus areas at the 2018 gtl that hold opportunity for the use of glass, she pointed out, include new uses for thin glass, multi-laminates and interactive technology/display glass, which she said is headed toward a full interactive display within glass.

This research, she said, allows for opportunities to engage with a material that people otherwise take for granted.

As far as future areas of interest, she says they’ve looked at 3-D printing glass. This isn’t likely to replace flat glass, but could be used to print, for example, fittings.

She also said there will be a need for transparent IGUs, and sees a lot of potential for the use of thin glass. For example, thin glass could be used to make a structure more transparent by eliminating the framing, allowing for ventilation by flexing the glass. “[It’s re-thinking] the whole idea of how building envelopes work,” she said.

Ramming closed her session saying, “glass in the form that isn’t just a flat sheet is interesting … it becomes more respectful of the properties of the material.”

The transparency conversation continued in the Fabricating Committee meeting with Product Category Rules, Life Cycle Assessments and Environmental Product Declarations (EPD) on the agenda. Members discussed the possibility of whether they should work toward the development of an industry-wide EPD for processed glass. Urmilla Sowell, technical director, said they’re trying to gauge interest, knowing there is a sustainability and transparency movement within the industry.

The Annual Conference continues through tomorrow. Stay tuned to www.usglassmag.com for more news and updates from Naples.