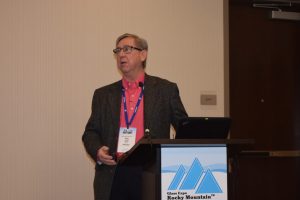 Attendees filled the seminar rooms this morning as Glass Expo Rocky Mountain™ (GERM) ′19 began at the Hyatt Regency Aurora-Denver Conference Center in Aurora, Colo. (suburban Denver). They were eager to attend the various seminars focusing on insightful information for the glass and glazing industry from experts in 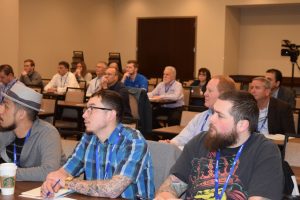 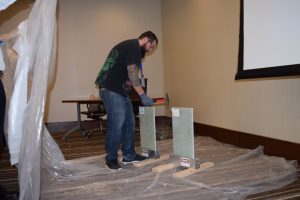 An attendee breaks two lites of glass to show the difference in strength between PVB (left) and ionoplast (right). 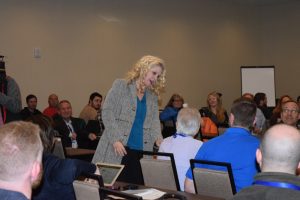 USGlass magazine publisher Debra Levy welcomed attendees to the show, which she described as “one of our best events.” She introduced the first speaker, YKK AP America Inc. ProTek brand manager Greg Galloway, whose seminar titled, “Blast Mitigation – How to Turn a No into a Yes (1 AIA HSW LU),” explained challenges and trade-offs when designing for blast mitigation.

According to Galloway, the best way to protect a building’s occupants from blasts is to keep explosives out of the building. Unfortunately, that’s not always possible. Codes require blast mitigation materials to help protect people during blasts.

Galloway suggested that architects and specifiers select the glazing make-up with the least glass resistance load that meets all requirements. It’s also vital for glazing contractors to be aware of which part of the blast system they are responsible for installing.

He said that bigger glass is better than smaller glass for blast mitigation because large units absorb shock waves rather than transferring them to the frame, which means the shock is absorbed over a larger area of the building.

He also recommended that glaziers give specific information up front to speed up the specification process. He said that compliance with blast specifications must include system framing converted into design pressure, glazing meeting requirements per ASTM E 1300, connections (anchoring) that accommodates the total blast load, and preliminary engineering before quoting if the job has blast specifications.

He said that U.S. construction starts had been increasing steadily but are starting to level out. The multi-family sector led the way after the recession, but single-family has rebounded as the economy has improved. Office construction has been a key driver on the nonresidential side in recent years.

New retail construction has stayed down since the recession due in part to a shift to online shopping, but store alterations are up, providing contract glaziers with more opportunities in the retail sector.

The real gross domestic product growth of the West, which includes Colorado, has outpaced the national average for a half decade. States have added jobs at a 2.2-percent rate in 2017, and at a 2.4-percent rate in 2018. Colorado Springs showed the largest growth.

Levy fielded questions at the end of the seminar. Russ Rozanskas, business development manager for Garibaldi Glass, asked if the industry really understands the cost associated with big glass.

“I’m seeing a lot of confusion,” he said.

Levy responded that it requires specific skills and materials to install and transport oversized glass, which has added costs associated.

Carey Mobius, president and CEO of Garibaldi Glass, said that it’s not only handling adding costs, but substrates needed to meet windload requirements.

“A lot of science and designs are not being tested in the market place. It scares me,” he said. “New staff is being added and people are too busy to train them effectively. Guys who have never been around small glass are now handling big glass. As a whole we need better ways to train people.”

Others added that codes and standards are still trying to catch up.

“Customers want a 20-year warranty on these products. We have to make a decision as the product goes out the door about whether to accept the liability,” said Rozanskas.

Next at GERM was “Designing Safer Glass Railings with Laminated Glass (1 AIA HSW LU),” led by Ron Hull, marketing manager for Kuraray Trosifol® PVB Marketing for the Americas, Europe, Middle East and Africa. He explained how new standards and code requirements are addressing the post-breakage performance of glass.

After the building code was updated, fully tempered glass was removed, leaving only the two laminated options. The exception is if there is no walking surface beneath the railing or the surface is protected from the risk of falling glass.

Hull explained that one of the major differences between PVB and ionoplast laminates is that PVB has a tendency to retain moisture, becoming cloudy around the open edges of railings, whereas ionoplast does not retain moisture. He said he’s not sure that this is a safety concern but impacts the aesthetics.

He also emphasized that it’s important for glass and glazing companies to know which version of the International Building Code their state has adopted, because it impacts the requirements and exceptions companies must meet.

Hull played several videos that showed the strength difference between standard PVB and ionoplast. He also asked an attendee to break two lites of glass, one with PVB and one with ionoplast, to showcase their strength difference in person. PVB adheres to the glass to prevent glass from falling to the ground after being shattered, but it cannot hold up the weight of the broken glass. Stiff PVB and ionoplast stay in place with the added weight.

Janine Driver, body language expert and New York Times best-selling author of You Say More Than You Think, began her dynamic keynote by analyzing attendee’s seated poses. She said that taking up space represents confidence and power. Her ability to use in-person examples kept the group on their toes throughout the seminar. Her body language analysis gives attendees the ability to detect others’ mental states, negotiate and improve sales.

Those unable to make the show today can still register in-person tomorrow from 7 a.m. to 2 p.m. in front of the Aurora Ballroom. Glass Expo Rocky Mountain™ ′19 run until Friday, January 25. Stay tuned to USGNN™ and usglassmag.com for our coverage from the trade show floor and beyond.