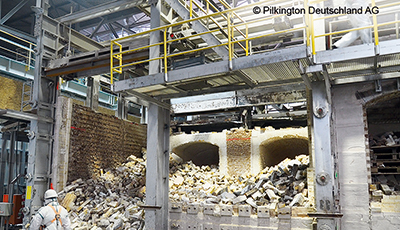 After ten years of continuous operation, the float two line has been modernized with a retrofit and new automation technology from Siemens.

After ten years of continuous operation, Pilkington’s float line two in Weiherhammer, Germany, used primarily for architectural glass, needed to be modernized with a retrofit in order to ensure production remains economical. Pilkington used its long-term partner, Siemens, in order to achieve the project within the 100-day time frame required. Automation solutions from Siemens were used to upgrade the line, allowing Pilkington to reduce energy consumption and exhaust emissions through intelligent controls.

Over a period of ten years, float two has produced up to 810 tons of glass daily, 365 days a year without a break. The line has produced the equivalent of a 3.5-meter wide glass sheet approximately 75,000 kilometers long – enough to go around Earth twice. The line had to be completely shut down for this cold repair. As part of the upgrade, the process control system has also been replaced with a solution from Siemens which had already been tested and approved in a factory acceptance test in Karlsruhe.

“By upgrading to a PCS 7 process control system, we now have a future-oriented investment in place on float line two which we can operate with complete confidence,” says Pilkington plant director Reinhold Gietl.

The new decentralized control system guarantees a high-quality production process as the PCS 7 process control system monitors precise maintenance of all variables during glass production, according to the company. Intelligent controls also contribute to energy savings and to minimizing exhaust emissions. At the same time, the open system architecture also provides a high degree of flexibility which is a precondition for further technical upgrades.

“Our central engineering department at Pilkington worked closely with the Siemens specialists and colleagues from the plant at Weiherhammer during the control system upgrade. The combination of automation and project management specialists worked perfectly,” says Gietl. “It is only through years of intense and proven collaboration with Siemens that we have been able to complete a project of this complexity without any problems in such a short period of time.”