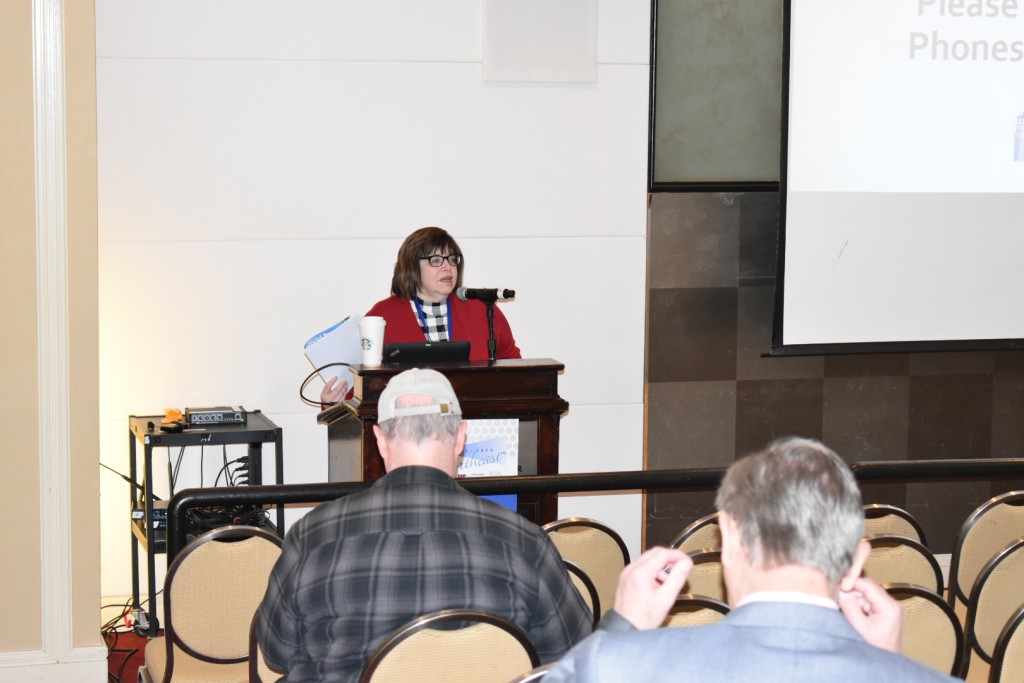 Debra Levy addresses the crowd at the welcome ceremony.

The 2019 Glass Expo Northeast (GENE) conference began with a warm welcome from Debra Levy, Key Media and Research president and publisher of USGlass magazine. As the crowd was filling in, each audience member introduced themselves, said where they were from and how they fit into the glass industry. By the end of the introductions everyone had a chance to get to know each other.

Levy also gave an overview of the two-day event including its seminars and what to expect on the show floor.

“This is the largest Glass Expo Northeast we’ve had, and the show keeps growing,” said Levy.

Seminars immediately followed the program overview and the first was focused on industry statistics. 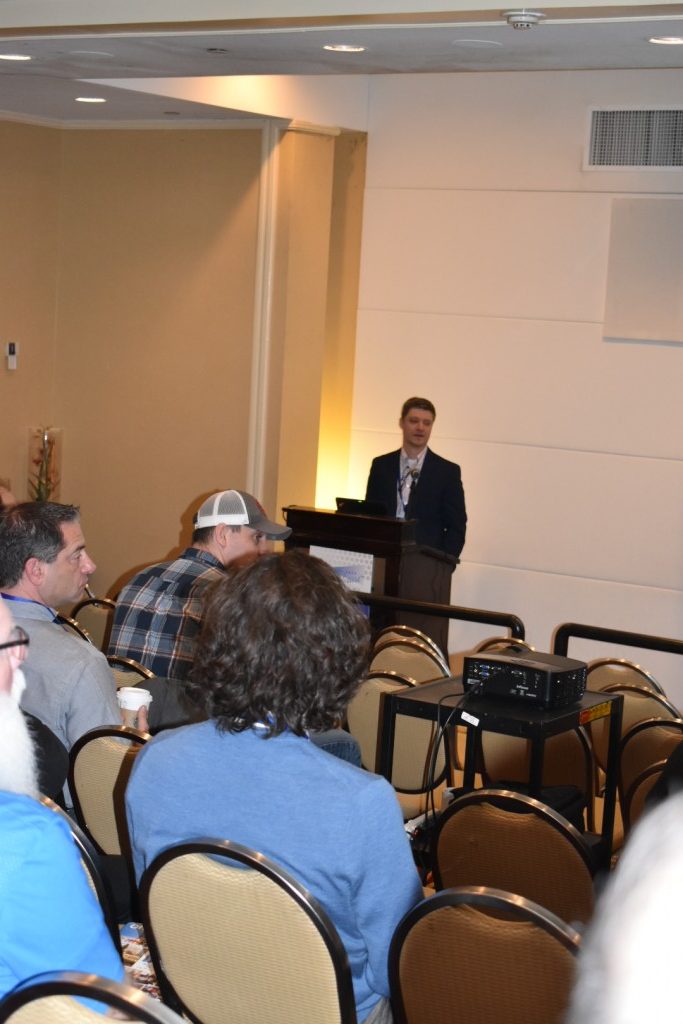 Key Media and Research’s director of research, Nick St. Denis, began his Glass and Glazing Industry Economic Outlook seminar with a focus on the housing market.

“Housing starts up are up more than 125 percent since 2009’s a historic low according to Dodge,” said St. Denis.

According to St. Denis, there is a critical reason why there has been such a positive increase in the housing market.

“The trend over the past few years is for the younger generation to start buying homes again,” said St. Denis.

“New retail construction has really stayed down since the recession due to online shopping. I’m sure you’ve been seeing this first hand. There have been a lot of storefront changes, which represent small-scale projects, and that’s a plus,” St. Denis added.

Institutional buildings are also on the up, (schools and universities, airport terminals) which are a big benefit, according to his presentation.

St. Denis highlighted the continued topic regarding industry employment. He stated, “we’re seeing things return to pre-recession levels, contract glaziers are hiring. About three-quarters of those we asked said they were hiring, but as I’ve said for the past few of my sessions, we constantly hear about the need for more skilled laborers.”

Aside from the need for more skilled laborers, there also seems to be another shortage; this however impacts the delivery side.

“There is a shortage of approximately 51,000 truck drivers in the U.S. and that number is expected to increase,” said St. Denis.

He concluded his seminar by informing the audience of a question he’s asked to industry professionals. 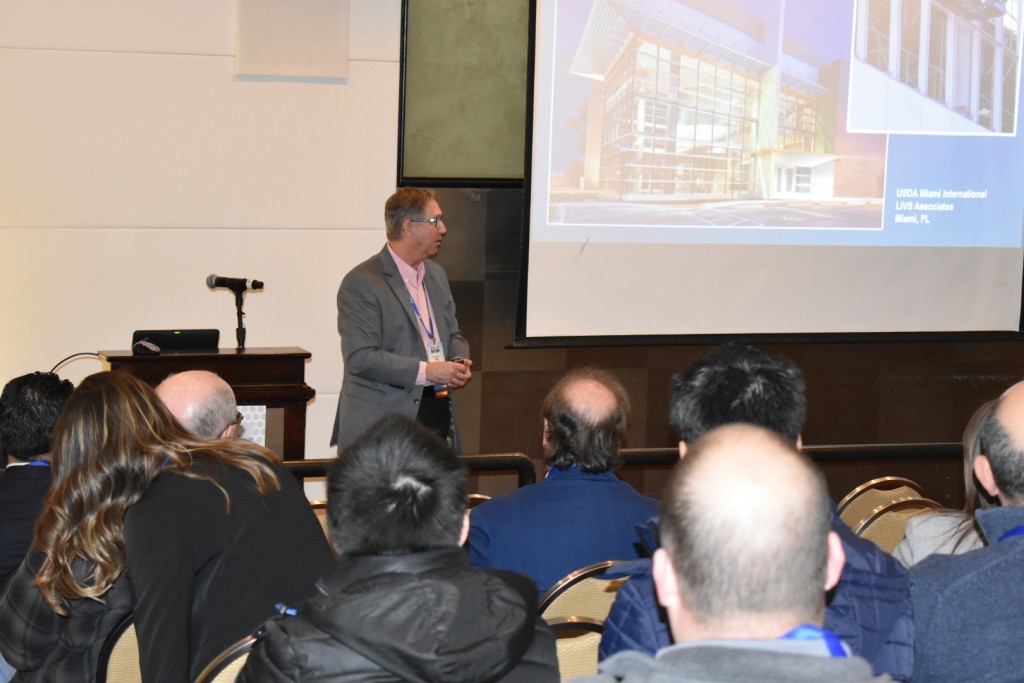 In the next seminar was not only informative, Greg Galloway, ProTek brand manager for YKK AP America Inc., discussed an increasing focus on unitized curtainwall.

Before diving into the benefits he defined the differences between unitized and stick built construction. Although both forms have been around for a while, there are still several differences Galloway shared with the audience.

“For the last three years or so we’ve seen a rise in unitized,” said Galloway.

Key points to remember about unitized, according to Galloway include:

Like with most things, there are drawbacks to unitized projects. Galloway mentioned there is usually an increase in the number of jobsite deliveries, everything must be shipped and installed in sequence, additional hoisting equipment is required because you’re piecing the project together one piece at a time, and it is not ideal with many stop-and-start conditions.

Stick built curtainwall projects were also discussed. During Galloway’s presentation he stated the two main benefits were the low shipping and handling costs and the ease of doing dimensional changes while on the jobsite. The key downside is the need for being able to adapt to environmental conditions.

“The key thing to remember is building design does matter,” said Galloway. “We’re seeing an increase in all systems that are moving more work and labor into the shop. It has significantly less costs than primarily working in the field,” Galloway added. 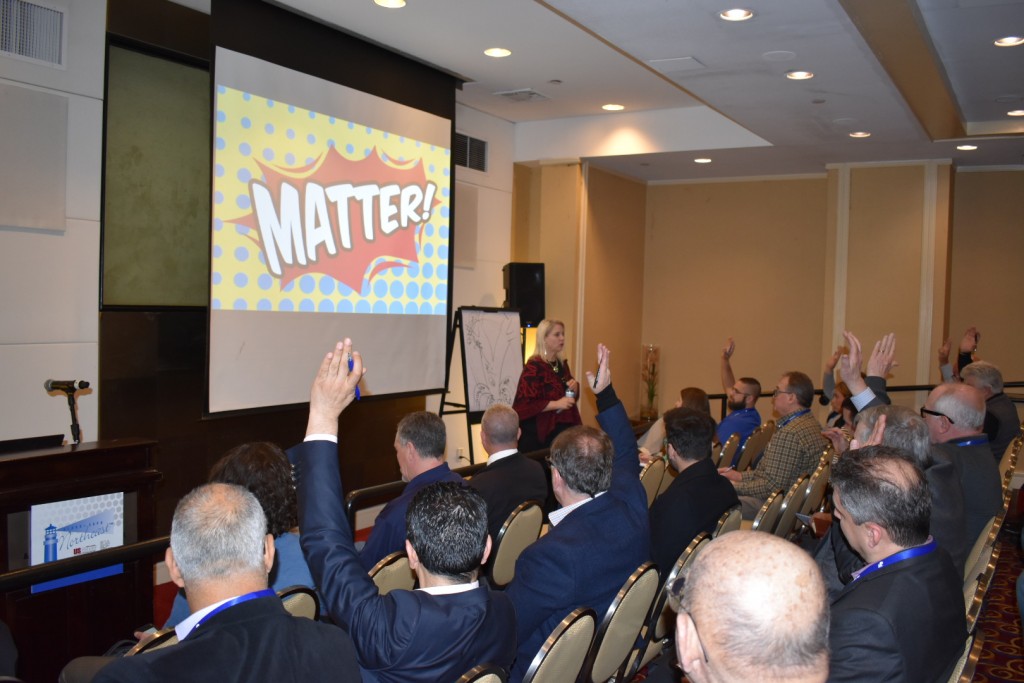 Janine Driver gets the audience involved during her keynote speech.

There was barely an open seat in the audience as Janine Driver, an author who specializes in body language, gave her keynote address. She began by addressing the crowd from the back of the room, and instantly gained high interaction from the crowd.

She explored and explained the importance of observing and understanding a person’s body language, as it allows you to gain information from a person without them saying anything at all, according to Driver.

“Body language happens before thought and we need to remember that,” said Driver.

The audience seemed to hang onto every word as she gave current examples from the media, shared examples from her family, and even used audience examples. Her emotion, energy and attitude were well received, as participation began and remained at an all-time high.

“Most people think it’s just Florida, but it actually expands farther than that,” said Valerie Block, CDT, LEED AP, with Kuraray America, as she began her session on the importance of knowing the proper codes relate to hurricanes.

She highlighted several key points that everyone in the industry should be aware of, especially in windborne areas, some of them included:

She also highlighted the downsides of not protecting windows in more prone areas throughout her presentation. She mentioned the associated costs with boarding up windows while a building is waiting for its glass to be replaced, the large amount of interior damage, and the potential mold on the interior of the building.

“Severe weather is something that people should be aware of, especially if they live in a highly prone area,” Block said. 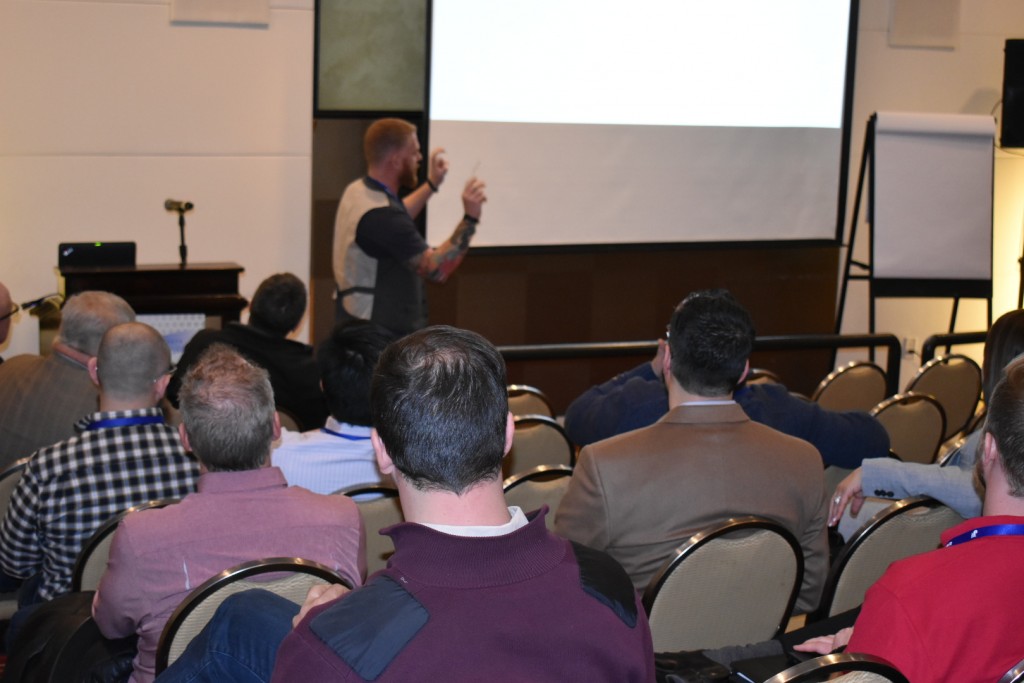 Dustin Anderson stresses the importance of knowing how to recruit the younger generation.

The final seminar, highlighting the importance in knowing how to effectively recruit and retain employees was given by Dustin Anderson, Anderson Glass owner, and spokesperson for Glass.com.

Anderson spoke about the importance of knowing how to market the industry to millennials as a means of combating the frequent labor shortages. He suggested companies meet millennials at career days, to show them how the glass industry is first hand.

“If one of the kids you talk to doesn’t end up in the industry that’s ok, but at least you met them where they were to create a culture around our trade,” said Anderson.

The show floor will be open this afternoon from 3 to 8 p.m. today, providing networking opportunities for attendees and exhibitors. Glass Expo Northeast continues through tomorrow at the Long Island Marriott in Uniondale, N.Y. Registration is open tomorrow from 7 a.m. to 2 p.m. Stay tuned to usglassmag.com for more news and updates from the show.