Record breaking numbers continued on the second day at the Glass Expo Northeast™ (GENE) ′19 conference. Dozens of attendees said “it was the largest conference in their neck of the woods” and they were glad they came. The Long Island Marriott was packed with industry professionals looking to see what they can learn in just a few days.

“This is always the best show to go to and it’s the best so far, I’ve been busy all day. It’s definitely a good problem to have,” said Scott Rubin, vice president of Cline Doors.

The amphitheater was filled with attendees for educational seminars throughout the morning before they took to the show floor yesterday afternoon.

Lyle Hill, Keytech North America and Glass.com president, presented the first seminar. He began by letting audience members select letters of the alphabet from a box. He then went through most of the letters in the form of business tips that can be used throughout the glass industry.

This game-style technique allowed dozens to interact with Hill, as they learned how to implement various tips within their companies. Some of the letters and tips mentioned included:

“My father always said you’ll never find a traffic jam on the extra mile. What it means is you’ll rarely find a person working for you that goes the extra mile. And you should hold on to them,” said Hill.

Some of the business tips were accompanied by comedic videos that helped increase engagement while also sparking more thoughts on why each letter holds a special significance. One video that instantly drew in the crowd was related to the letter “M.” In the short video clip members of the Key Media & Research staff stated what they believed the letter meant. When Hill informed that they were wrong he informed then that “no one will market you better than you.”

Trends in Glass and Glazing

“The constant thing has been change itself,” said Consulting Collaborative CEO Richard Voreis as he began his session focusing on the trends in glass and glazing.

One of his most talked about industry trends involved future materials that are currently being created. 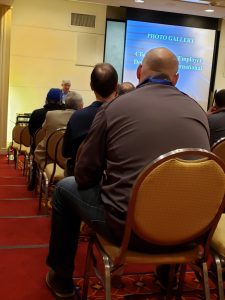 “The future will definitely incorporate silica, carbon nanotubes, aluminum metal foam and bamboo. The bamboo however will mostly be seen on a building’s interior,” said Voreis.

According to Voreis, aluminum represented 85 percent of the non-residential market segment in 1980, and in 2018 it represented 84 percent, only a 1 percent decline.

“Part of the reason the market did not see a large decline was because, aluminum has a height strength to weight ratio and has held its worth over time,” said Voreis.

He also mentioned why contract glaziers should capitalize on building integrated photovoltaics (BIPV). He stated the DOE estimates BIPV and building applied photovoltaics have the potential to generate up to 50 percent of the electricity needed across the U.S.

“There is plenty of room for growth in fenestration applications, rooftops and buildings, and even ground mounted systems with photovoltaics,” Voreis said.

He also spent a significant amount of time speaking on the need for more qualified skilled laborers in the industry.

“There are plenty of older guys who are looking to retire, but who is in line to replace them? We as an industry need to look into different ways to connect to the younger generation because many of them are getting into computers,” Voreis said.

The seminars concluded with a presentation that gave insight on the importance of architectural glass storage and maintenance. This seminar allowed architects to receive 1 AIA LU credit. 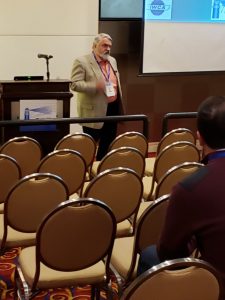 Paul Düffer, who retired from PPG Industries’ research and development department, spoke about the instances where glass can become molded. His photos instantly grabbed the crowd’s attention as he went into detail on how moisture can build and damage glass.

“Glass surface corrosion occurs when an environment remains moist for extended periods of time and comes in contact with glass. This can often happen, but the important thing is doing something about it before it gets worse and you either have to do a full restoration or replace the glass,” Düffer said.

Düffer also mentioned that project managers and architects should be aware of certain cleaning materials that can actually damage the surface of glass panels and ruin the overall look of a project.

“It’s always important to go with a quality cleaning professional because glass is vulnerable and if it’s not treated and properly cared for you could be looking at an infinite amount of dollars spent to correct an issue that didn’t have to exist,” Düffer said.

For more on products displayed on the show floor, look to usglassmag.com and USGNN on Monday.