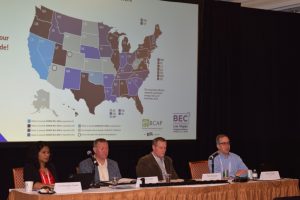 Energy codes were at the top of the agenda at the Installing Committee meeting held in Las Vegas at the 2019 Building Envelope Contractors (BEC) Conference sponsored by the newly combined National Glass Association and Glass Association of North America. Code consultant Tom Culp’s presentation, “Energy and Green Building Codes, Need-to-Know Changes Affecting Contract Glaziers,” held on Sunday afternoon before the Installing Committee that oversees the conference, looked at recent and upcoming code changes.

Culp pointed out that it takes a while for states and jurisdictions to adopt new energy codes. As a result, the industry is now seeing the adoption of the 2018 International Energy Conservation Code (IECC) and ASHRAE 90.1-2016. The latter could be adopted for new federal buildings soon.

ASHRAE 90.1-2019 is being finalized this year and will be published in October while hearings are being set up for the 2021 version of IECC. California Title 24 will also have a new edition in 2019.

He did point out that the industry is still defending against reductions to the window-wall ratio area and that no changes will be made in the ASHRAE 90.1 update. However, there is a new requirement for increased envelope inspections of building air leakage testing.

“It’s not just about having an air barrier … somebody taking a closer look to make sure there’s air continuity,” said Culp.

The Code will contain a 5- to 17-percent reduction in U-factors and only modest reductions to solar heat gain coefficients, with the biggest change happening in zone 1. Culp described the changes from the 2016 to 2019 versions as a zone shift.

“[The requirements for what] was in zone 7 will move to zone 6, zone 6 to zone 5, etc. It’s shifting to be more stringent further south,” he said.

The product categories in ASHRAE 90.1-2019 will match those in the IECC.

Culp explained that two items did not make the 2019 update: trade-off limits and thermal bridging, saying that the industry needs to be careful about trade-off limits,” said Culp.

Culp also said that thermal bridging could come into play in that future edition of the Code. He said that metal penetration can reduce the effective R-value of insulation by 20 to 40 percent. The code could address how to prevent bypass of insulation without having a negative impact on structure.

While ASHRAE 90.1 could adopt thermal bridging requirements in the future, Culp said they would need to come up with something more simplified that can be applied to every building in the U.S. This would not involve PSI and CHI factors and would only apply to climate zones 4 and 8. He expects  there will be pressure to have these factor numbers so companies should plan to have them available.

ASHRAE 90.1 just approved a proposal for a new prescriptive requirement for the minimum amount of on-site renewable energy on all new buildings. It will continue to push photovoltaics (PV) on rooftops and in building integrated photovoltaics on other areas of the building such as the spandrel area.

“PV is starting to become mainstream as prices have dropped,” said Culp.

Starting June 3, 2019 in Vancouver, British Columbia, all commercial buildings and high-rise residential buildings will have to meet the Zero Emissions Building Plan performance limits, which push triple glazing. Culp explained that this could have an impact on weight, installation and installation equipment. Thermal bridging is also included in the plan, which requires project teams to look at every connection point. Culp said that the industry may need to hire consultants to figure out the details of these complicated systems which include PSI factors (linear thermal bridges) and CHI factors (point thermal bridges).

“There’s going to be a lot of scrambling,” he said. “Make sure to give yourself enough time to prepare for that if you’re in this area.”

Natural Resources Canada is proposing to regulate residential windows under Minimum Energy Performance Standards, which would impact small non-residential buildings as well. Culp said that right now, if someone doesn’t put in the correct product the building owner is liable. In this standard the manufacturer would be liable. This could impact commercial entrance doors and small, standalone retail projects. Culp said a comment has been filed to address this.

Stayed tuned to USGNN™ and usglassmag.com for more coverage of BEC. The conference runs through Tuesday, March 5.