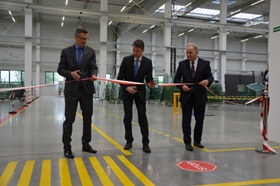 NSG Group’s architectural business in Poland held an official ceremony and grand opening of its new manufacturing plant in Bialystok, Poland, on May 16, 2019.

The new plant is equipped with four modern lines for the production of double glazing, together with glass cutting systems. A new glass tempering furnace will be installed later. The construction of the approximately 33,000-square-foot plant was headed by Panattoni Europe, with which Pilkington has worked previously during the construction of a production and logistics center in Chmielów. It will create around 200 jobs with the possibility of further expansion.

This new plant is another NSG Group investment in this city. The Pilkington IGP branch in Bialystok has been involved in the production of double glazing and metal glass racks for many years.

“The dynamic development of the window market in Poland, as well as favorable conditions for business development in this region, influenced our decision on further investments in Bialystok,” says Krzysztof Granicki, managing director of Architectural Glass East and Nordic Europe. “The construction of a new processing plant will strengthen the position of our company in this region, and will also contribute to an even greater improvement of customer service.”