The Joint American Architectural Manufacturers Association (AAMA) and Insulating Glass Manufacturers Alliance (IGMA) Summer Conference continued Wednesday with a focus on regulatory affairs and codes in both the U.S. and Canada.

AAMA codes and regulatory affairs manager Kathy Krafka Harkema led this update. She gave members an overview of relevant news in the energy sector, such as there being more energy efficient jobs and the implementation of more renewable, clean energy. 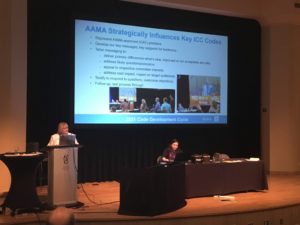 She followed that discussion with an update on the rainscreen industry. Representatives of the industry met in Las Vegas on June 5 with the goal of bridging the gap between manufacturers, designers and installers to influence rainscreen codes. AAMA technical director Steven Saffell advocated for AAMA by pointing out that the organization has documents referencing rainscreens and making the rainscreen representatives aware that their involvement and input can influence the relevance of these documents.

IGMA executive director Margaret Webb let members know that the Canadian government is looking for more industry funding and will require CAD $20,000 to renew a standard with no changes and $80,000 with revisions. Webb pointed out that CAN/CGSB-12.8-2017 on insulating glass units will be up for review in 2022.

Krafka Harkema began the joint code report with insights into the recent International Code Council (ICC) committee action hearings in Albuquerque, N.M. She said the hearings include 11 days of testimony and over 1,300 code proposal changes.

“We made an effort to work together as an industry to make sure we were on the same page and that our votes weren’t canceled out,” she said, adding that the industry voting together creates more collective clout.

AAMA worked with the Window and Door Manufacturers Association, the Glazing Industry Code Committee and the Aluminum Extruders Council. AAMA submitted eight proposals, was a co-proponent for eight proposals, supported 14 other proposals and opposed 26 proposals.

Krafka Harkema reported back to members that AAMA had a “great track record” in its favor at the hearings. Public comments are due July 24 and the public comment hearings will be held October 23-30 in Las Vegas. The unofficial results of the hearing will be available in early December.

“We’re in a much stronger position than we have been in years past,” said Krafka Harkema. “We’re not playing defense.”

One of the proposals recognized AAMA 2502-19, which revises an exception to S108-19 IBC Section 1709.5 to permit engineering analysis of alternate sizes per AAMA 2502 with physical testing of a baseline unit (not each alternate size). This expands the ability to use comparative analysis of assemblies larger and smaller than the size originally tested. The proposal was approved 11-3.

Kevin Seiling, vice president of engineering at Veka, led the Southeast region code report for AAMA. He informed members that reports released after Hurricane Irma in Florida pointed to windows and sliding/swing doors as the biggest cause of water intrusion. Seiling said an AAMA work group is recommending that the Florida Building Commission fund research that evaluates the entire building envelope on high-rise buildings to determine the causes of water infiltration.

The Joint AAMA/IGMA Summer Conference runs through Thursday, June 20. Stay tuned to USGNN™ for our continuing coverage of the event throughout the week.