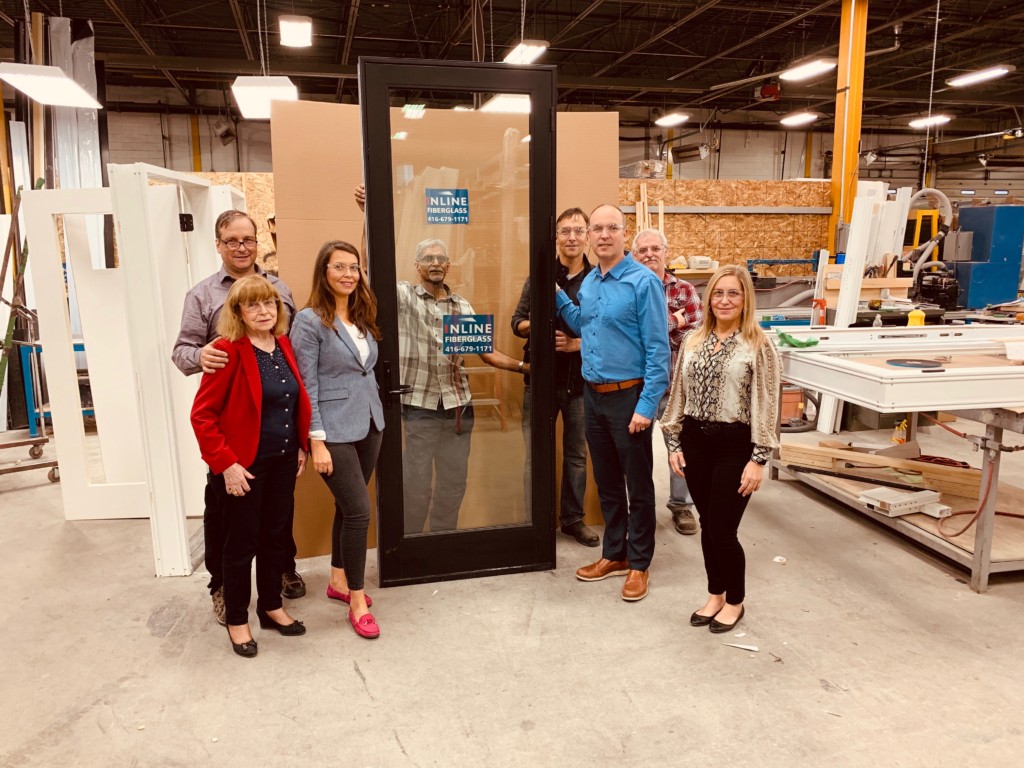 Members of the Rokicki family and Inline staff pose with the first door manufactured at the plant. (Photo provided by Inline.)

Inline Fiberglass, a company that has focused solely on fiberglass windows, is now adding fiberglass doors to its product line.

Inline chief operating officer Bernard Rokicki says the new endeavor will allow the company to provide its customers the cohesiveness they’ve been seeking from the lineal manufacturing company. Inline, based in Ontario, Canada, has been focused primarily on fiberglass windows since its founding in the 1970s.

The company operates two plants in the area: a main manufacturing building, where Rokicki says they plan to manufacture the new products, and a secondary manufacturing facility where the company will transfer the production of some current goods.

Inline manufactures both window frames and fenestration products for the residential and commercial industry while also designing technology and equipment to manufacture fiberglass components.

According to company officials, Inline initially plans on launching both entrance and garden doors with future plans to add other products. The company already offers sliding doors and tilt-and-turn products. While the company has introduced some of its new offerings through a soft-launch, the remainder of the products will be introduced during the official launch on June 15.

“It is a natural progression for us that we enter into the door market,” says Tom Rokicki, Inline operations manager. “This new offering will allow our customers to single source products and at the same time we will fill a void in the market. An all fiberglass door system is the perfect synergy between the jamb and slab which allows them to work in tandem. As with all our lines we will offer it in both a lineal program and finished product for both manufacturers and end users.”

Bernard and Tom Rokicki are among five siblings involved in the family-business founded by their father, Stanley, and based in Toronto. Stanley Rokicki started manufacturing aluminum in his garage before making the transition to fiberglass because he said “that’s where the future is headed.” Until this day, Inline staff believes in the viability of fiberglass, explains Bernard Rokicki.

Over the years, Bernard Rokicki said Inline kept getting inquiries about selling door products and recently officials agreed the demand would make the addition of doors an intelligent business decision. About a year ago he said the company, that employs about 200 people, began to recruit more folks to help the company enter into this market.

“We expect in our first year probably a 10% growth in relation to adding doors to our existing line,” he said. “We do a lot of residential but we also do light commercial work too. So there are all these opportunities all the time and without really advertising, we’ve already taken on a lot of orders already. We expect this to be quite big–and quite quickly.”

Rokicki said Inline staff tried to mimic the design of their windows into their new door products—fiberglass frame and a fiberglass slab only—to offer what the company calls the “glass on glass” advantage.