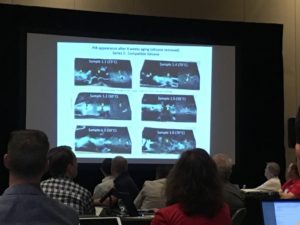 The IGMA Technical Services Committee looks at the results of PIB testing with compatible and incompatible materials.

Task group affairs and a presentation on leadership filled most of the final day of the Joint American Architectural Manufacturers Association (AAMA) and Insulating Glass Manufacturers Alliance (IGMA) Summer Conference in Victoria, B.C.

Both IGMA’s Technical Services Committee and several AAMA work groups met during the morning. IGMA executive director Margaret Webb informed members that the Edge Pressure Task Group has struggled to address their scope. The group plans to put out a request for a proposal with the intent to partner with a university or other entity on the scope. 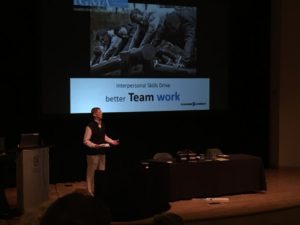 The IGMA Technical Services Committee looks at the results of PIB testing with compatible and incompatible materials.

Brian White with H.B. Fuller updated the committee on the polyisobutylene (PIB) compatibility testing. PIB was tested with compatible and incompatible materials and observed after four weeks of aging. White said the test results were as expected.

The work of the Joint AAMA/IGMA Prequalification Testing of Glazing Infill for Hurricane Products Task Group was discussed during the AAMA Architectural and Curtainwall/Storefront Products Meeting on Wednesday and then again during the Technical Services committee meeting Thursday.

The task group developed a new scope: to develop a method of testing and/or certification for glazing manufacturers to assure best practices for glass used in the hurricane impact market. Some suggested that the laminated glass suppliers have been relying on the framing suppliers to do testing when usually it’s the glass that fails during a hurricane event. The goal is to create more quality control on the laminated glass side so that the bar is raised, and systems suppliers can be confident that the product will be equivalent to what was tested. The scope was approved.

Moser emphasized the importance of trust in teamwork. He said that teams must trust each other and be working as a community to succeed. Having people separated into departments can sometimes create individual communities that don’t unify the team as a whole.

Moser also said interpersonal relationships, in and outside of work, depend on trust, love and unification. People need to be appreciated for who they are and emotionally connected.

He outlined four different personality types (drive, influence, calculating and supportive) and how it’s important to understand how each personality type works and what they need in order to influence them to be successful.

He ended his presentation by saying that leadership is a combination of character and competence, and character is the most important of the two.

For more information about the leadership development program click here.

During the AAMA governance meeting, and after much discussion, members voted to make AAMA 930-03, Voluntary Specification for the Water Penetration Resistance and Structural Load Performance of Locking/Latching Hardware Used in Side-Hinged Door Systems, inactive because it is no longer being referenced or used.

AAMA executive director Janice Yglesias gave members a look at the fenestration certification program FenestrationMasters 2.0, which is expected to launch later this summer. It includes updated content, is more engaging and effective, and has a more modern look, according to Yglesias. She told companies that if they don’t have a dire need to complete the first part of the program to wait until version 2.0 is launched.

AAMA will hold its National Fall Conference at the Hyatt Regency Lost Pines in Austin, Texas, September 30 through October 3. If the proposed combination of the two organizations is approved, AAMA and IGMA will meet jointly at the Marriott Harbor Beach in Ft. Lauderdale, Fla., February 10-13. If the combination is not approved, AAMA will meet in Ft. Lauderdale at that time and IGMA’s winter conference will likely be held in New Orleans.