The Architecture Expo floor at the AIA Conference on Architecture 2019 in Las Vegas is where glass companies are displaying the industry’s latest trends and products, such as a transitional film, hidden hardware and products used for school security.

At Window Film Depot’s booth, the company is demonstrating how CoolVu Transitional Window Films’ product works to block sunlight and heat. Jeff Franson, president of CoolVu, explained that many people complain about window tint making a space too dark at night or during overcast weather. 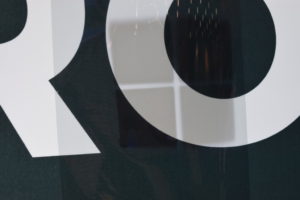 CoolVu darkens when triggered by UV light after 30-40 seconds of exposure, changing the visible light transmission for 70% to around 40%. He referred to the product as the “little brother version of dynamic glazing.”

Franson said the company is focusing on storefront applications and window film replacement projects on big commercial buildings after the previous window film reaches a point of needing to be replaced. 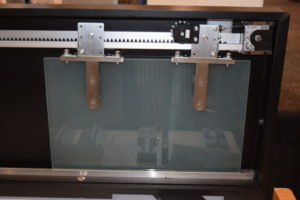 The sliding door closer from Kenwa Trading Corp. is being specified increasingly in healthcare applications because it saves space.

On the hardware side of the industry, minimalism continues to trend. Kenwa Trading Corp. is showcasing its sliding door closer, which includes soft- and self-closing on a rolling system. Kenji Ikeuchi, sales manager, said the sliding door closer increasingly is being specified for healthcare applications because of its aesthetic and ability to save space.

Ikeuchi said the company’s invisible door hardware is also popular among architects because they prefer to have as little hardware visible as possible. 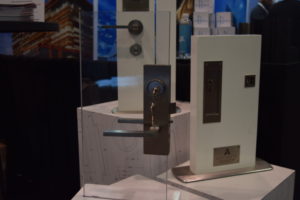 Accurate Lock and Hardware is catering to the minimalistic hardware trend with a narrow back set mortise lock.

Rodd Salvatore, vice president of Accurate Lock and Hardware, has also noticed the continuation of this trend. The company displayed its narrow back set lock, a mortise style lock with a more slender look. The company is also offering a retrofit patch kit for cylindrical locks so that all hardware across a project can look seamless whether a glass, wood or metal door. 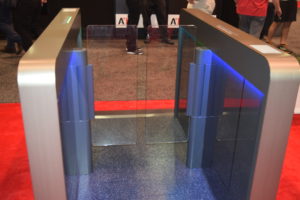 dormakaba’s anodized aluminum swing lane is light weight and can be integrated with access control for lobbies and entrances.

Dormakaba’s newest product is an anodized aluminum swing lane that is more light weight than its stainless-steel counterparts. The swing lane comes in different finishes and, because its modularized, multiple finishes can be used throughout the hardware. It can be used for lobbies and security desk areas in offices and high-rise residential projects. The swing lane can also integrate with access control.

David Hatt, sales manager for Armortex, said the company has had the most growth in its ballistic-resistant products, especially in schools. Entrances, transaction windows and executive offices in corporate facilities are the most common applications for the company’s products. Armortex offers bullet-resistant glass and glazing systems as well as fiberglass wall panels to create bullet-resistance in the walls surrounding the glazing system.

Hatt said that level 3 protection used to be the predominate ballistic protection level used, but now there’s been a shift toward more level 8 protection being specified, especially for police station projects.

Avanti Systems has also seen an increase in demand for protective glass products in schools. The company offers interior glass products and has seen more specification of tempered and laminated safety glass products. According to Bruce Young, design manager for Avanti, the company is hoping to get specified in more university projects going forward.

Stay tuned to USGNN™ next week for more coverage of the AIA Conference. The Architecture Expo runs through 5 p.m. PT today and the overall AIA Conference ends Saturday, June 8.