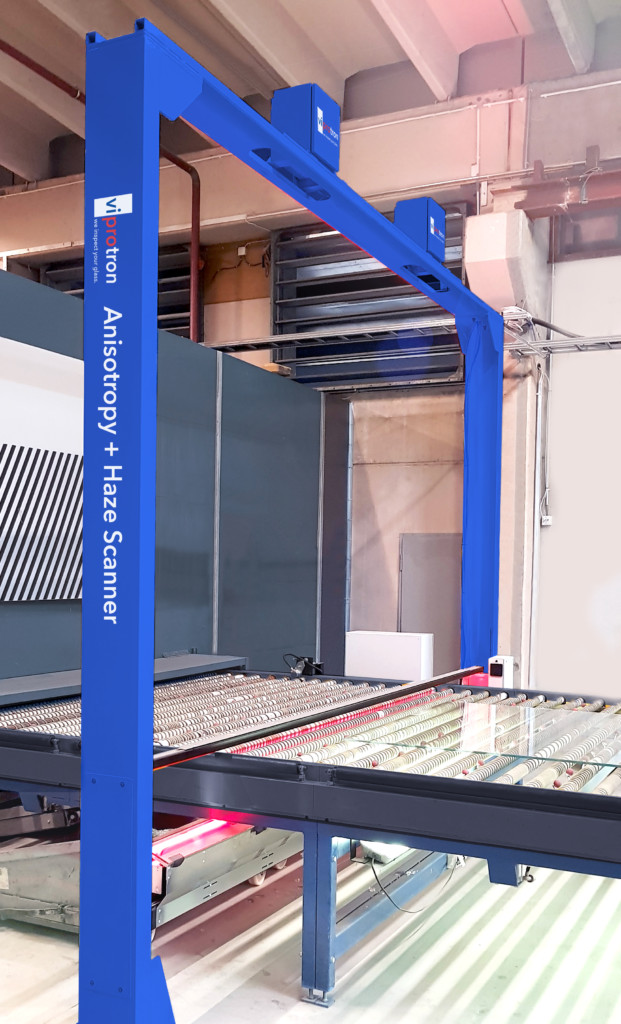 Current anisotropy inspection equipment, such as this scanner from Viprotron, inspects more than just anisotropy, combining multiple solutions in one machine.

Anisotropy is an unwelcome presence. It could even be called a menace to architectural aesthetics. If polarized light hits a glass façade with high levels of anisotropy, it will appear distorted to the eyes of everyone who looks upon it—including the architect. While it may be impossible to rid glass of anisotropy completely, technological developments in scanning equipment are providing fabricators with the information they need to better prevent their tempering lines from producing glass with high levels of anisotropy.

The Merriam-Webster definition of anisotropic is “exhibiting properties with different values when measured in different directions.” Annealed glass has no anisotropy. However, when glass is tempered it is brought to a high temperature and then cooled rapidly. The edges of the glass and the areas directly under the air nozzles cool faster than other areas, resulting in different stresses throughout the glass. This effect typically is more pronounced in thicker glass because the inside of the glass takes longer to cool than the surface.

According to Nate Huffman, president of Softsolution in Glenview, Ill., if light is passed through glass under stress, then different changes in direction, depending on the wavelength, result in the glass mass. The light waves emerge from the glass with a certain delay. If the light is polarized by natural or artificial factors, such as reflecting off of water, these delays become visible as grey or colored spots or striped patterns.

In the past, fabricators could look for anisotropy manually using a polarized light in a time-consuming process. In the past two to three years, several companies began offering on-line anisotropy scanning equipment, which has made the process quicker and more accurate. These scanners are placed on the tempering line after the cooling process, giving fabricators real-time information about the anisotropic effect in their glass.

LiteSentry, based in Northfield, Minn., partnered with Stress Photonics to create the Osprey 8 Anisotropy Inspection System, which measures glass for iridescence, retardation and average stress using cameras with a light source underneath the glass. Jakub Kowalczyk, sales and marketing manager with LiteSentry, says the Osprey 8 can be installed with any tempering line. It gives live, on-line measurements of the light retardation in nanometers as the glass leaves the quench or cooler. Light waves are broken up through the tempered lite due to the different stresses caused by the tempering process and the Osprey 8 looks for differences in light behavior due to those stresses. The system can also measure predictive iridescence, which Kowalczyk says is a visible derivative of retardation.

“Theoretically, you can get a pair of polarized sunglasses for a few bucks at the store and go look at anisotropy, but that doesn’t give you any information … We use a three-color polarized light source from underneath the glass and we inspect the glass for polarized states,” he says.

The system does not need to be recalibrated for different glass types or colors. Kowalczyk believes that anisotropy- and iridescence-free glass will continue to be in demand among architects, driving the glass industry to measure these characteristics in tempered glass.

“Architects and consumers are demanding higher quality glass; they are demanding anisotropy- and iridescence-free glass … I think, absolutely, anisotropy and distortion measurement in a single footprint is going to become the standard for 10-20% of your high-quality producers; they’re not going to be able to win jobs or bid for projects without it,” he says.

Softsolution’s system, the LineScanner, also passes light through the glass using telecentric light modules with a special polarizer foil and measures the speed difference as light passes through the glass with its various stresses. The LineScanner gets a nanometer delay value that quantifies the defects in the glass using line sensors. Huffman says that anisotropy below 60 nanometers is not visible to the human eye. Between 60 and 150 nanometers the eye will notice distortion and above 150 nanometers the distortion will be obvious.

“Due to the precise 90-degree constant angle across the entire inspection width, the path taken by the polarized light through the glass body undergoing testing is always the same length. This ensures that there is no distortion to the result of the evaluation, which is based on the delay of the light,” explains Huffman.

Huffman says that one thing that sets the LineScanner apart is that it’s able to scan completed units as well as single lites so that a fabricator doesn’t have to guess how the anisotropy will appear in a completed insulating glass unit.

The StrainScanner from Arnold Glas Corp., based in Remshalden, Germany, is made in partnership with Arcon and Ilis. It measures light from an LED panel with a polarimeter device that includes cameras. The cameras measure for optical retardation in nanometers, similar to other anisotropy inspection equipment, and give immediate feedback to the oven operator. Stefan Goebel, general manager for the company, says that current technology gives a good measure of anisotropy, especially with a polarizer. The StrainScanner can also simulate the worst-case viewing angle.

Rainer Feuster, sales director at Viprotron GmbH in Pfungstadt, Germany, says that his company’s anisotropy scanner works by finding the differences in light transmittance, rather than measuring stress, to determine optical retardation. The company’s anisotropy scanner currently on the market is the second version of the system. It was updated to have tighter tolerances, according to Feuster.

To read the full article, which originally appeared in the August 2019 issue of USGlass magazine, click here.