The 2019 Fall Conference, originally organized by the Glass Association of North America (GANA), and now a part of the National Glass Association (NGA), began today in the “Glass City” of Toledo, Ohio. The sessions opened with the Forming Committee Meeting (formerly the flat glass division of GANA) with what committee chair Mark Cody of AGC Glass Co., called the best crowd ever for this division’s meetings. 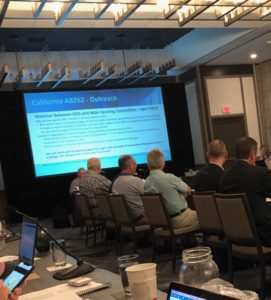 Urmilla Sowell, NGA technical director, provided an update on a number of activities underway within the group, including an industry-wide flat glass Environmental Product Declaration (EPD) update. The flat glass members are working on this and currently have a draft of the document, which should be published by the end of the year.

The group also discussed a flat glass Product Category Rule (PCR) that was originally published six years ago. Before that document expired in March of this year, the Forming Committee members had decided to update it. However, since nothing has truly changed when it comes to making flat glass, the update will be editorial only. The group was granted a one-year extension since the changes are simply editorial. The flat glass manufacturers will be working to update the document over the next few months.

Sowell also provided an update on CA AB262 update. This California legislation requires contractors bidding on state infrastructure and construction projects to disclose the global warming potential for certain products, including flat glass. The California Department of General Services (DGS) had to set a global warming potential number and that number comes from the flat glass (or other building material) EPD. One challenge for the glass industry, has been the concern that an industry-wide EPD for flat glass currently doesn’t exist. Last August, the association issued comments to the DGS outlining its issues and concerns, explaining that facility-specific EPDs should be considered. The DGS responded that “individual facility compliance cannot be verified through submission of a multi-facility or industry-wide EPD …” Sowell reported that the DGS “made note that AB262’s requirement for facility-specific EPDs could result in excluding products from California’s marketplace and will further investigate the issue …”

April of this year the Forming Committee met with employees of DGS along with their general counsel for a question and answer discussion addressing facility-specific EPDs as well as industry concerns.

According to the DGS timeline, California will begin requiring EPDs in January 2020.

During the Recyclability Task Group update, Cody discussed the development of a Glass Information Bulletin that will address some of the concerns/restrictions of recycling glass in the primary forming/float plants, and why it’s not possible to recycle some of these glass products. Cody said they want to find some avenues that you can recycle glass because float glass companies are limited in terms of what they can recycle. For example, the logistics to moving crushed glass from one site to another can be limiting. The group will be working on this document between now and the next meeting.

During the Advocacy Committee meeting, code consultant Tom Culp provided an update on a number of energy codes, including ASHRAE 90.1, which will be published in October. One of the focuses in the new version will be a continued expansions of daylighting, including better controls and more spaces.

There were a number of areas that are still in the works and did not make it into this version, including envelope trade-off limits or backstops, which Culp said is starting to come up in more detailed discussion.

He explained that when using the performance path to do tradeoffs, the proposed envelope backstops mean the following:

Culp stressed that the industry agrees it doesn’t want to see the use of poor performing windows, but there are concerns. For example, he explained that the measures go against the “philosophy of performance-based standards and integrated design … what matters is the overall building performance, not how you get there.”

Culp noted that there could be potential negative impact on window area for highly glazed buildings, as anything above 40% window-to-wall ratio (WWR) must be made up in performance path tradeoffs.

As far as window area, he said there have been no direct attacks in WWR in recent code cycles, but there is a growing indirect pressure on WWR. Backstops, he said, restrict the types of tradeoffs that can be used.

Culp added that with or without backstops the industry must continue to promote high performance glazing and framing as the solution.

In the 90.1 proposal, they proposed that envelope performance factors may not exceed the baseline envelope by more than 15% in multifamily, hotel/motel and dorm applications and 7% in all other buildings.

This provides flexibility in a number of ways. He said limits were established by modeling to allow about a 70% WWR with prescriptively compliant windows. He added that a 90% WWR with good orientation, shading and/or better windows could be a possibility.

Culp said that for high-performance systems, backstops are a plus, but for glazing “we are between a rock and a hard place.” He said the industry would prefer no envelope backstops that impact glazing area, but if something is going to be done, it’s better than other alternatives or what individual locations may do.

The Fall Conference runs until August 15. Stay tuned to USGNN for more news and reports from the event.