GBA Exhibitors Wow With Focus on Aesthetics, Sustainability and Safety 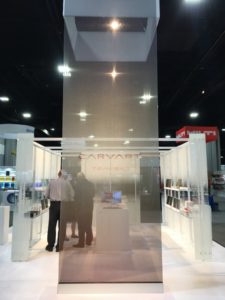 Aesthetics, sustainability and safety are some of the major drivers of trends in the architectural glass and glazing community. Those trends were on display at GlassBuild America (GBA) in Atlanta this week as exhibitors showed off the industry’s latest innovations.

Carvart’s booth displayed a 20-foot lite of tempered, laminated glass with a metallic mesh interlayer. According to Sharon Sauli, sales and design, the company will begin fabricating certain product options in its glassXL sizes, up to nearly 40 feet (126 by 471 inches). Carvart products that can be fabricated up to that size include its core, color, metallic, textile, natural, gradient and graphic products as well as acoustic interlayers and SentryGlas.

Aesthetics are a major driver of trends in the architectural community. Southern Aluminum Finishing Co. is showcasing its C4200 rainscreen system, which doesn’t expose any riveting. 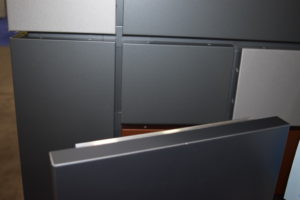 Eurotech Showers focused on aesthetics and safety during GBA. The company’s booth featured a prototype of a patent-pending glass shower door design with a fixed lite. The design requires only two holes to be drilled into the glass and the rollers can roll over the fixed lite.

According to Ruth Nichols, a representative for the company, Eurotech aims to reduce glazing challenges. One way it’s doing that is through its adjustable rollers, which can be adjusted up to ½ inch in a situation where the holes were measured incorrectly. Its shower doors also include a safety feature that prevents the glass from slamming to the wall or tile when being opened and a feature that catches the glass with a seal closing.

Its rollers are also two-sided to ensure a better aesthetic, according to Nichols. 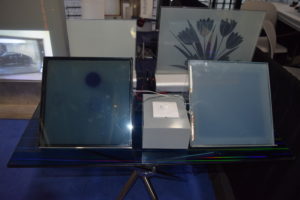 Polytronix used GBA as an opportunity to test response to its new dimming privacy film. The film can be dimmed from nearly opaque to different levels of translucency before becoming transparent. The company also paired its dimming film with photochromic glass on an insulating glass unit. The glass becomes darker when exposed to sunlight.

While some trends on the show floor were easy to see, others were less about aesthetics and more about being green.

Gunther Mirror Mastics and H.B. Fuller Company is going away from tubes of adhesive to sausages, which global sales and marketing director Grant Huffine explained is better for the environment. The sausages are more popular in Europe, according to Huffine, who added that the trend is starting to make its way to the U.S. 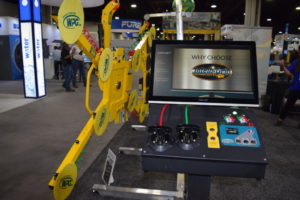 Wood’s Powr-Grip plans to introduce an app to allow for monitoring of its lifters while their control panels are inaccessible.

Wood’s Powr-Grip showcased its DC3 dual vacuum lifter with Intelli-Grip technology. The lifters include software that includes added safety features. The company plans to release an app soon that will connect with the software and allow for ease of monitoring when the lifter’s control panel is inaccessible. The app will provide users with live vacuum levels, diagnostic codes and battery levels, and can alarm users when a change occurs.