How to Win the Battle for the Wall 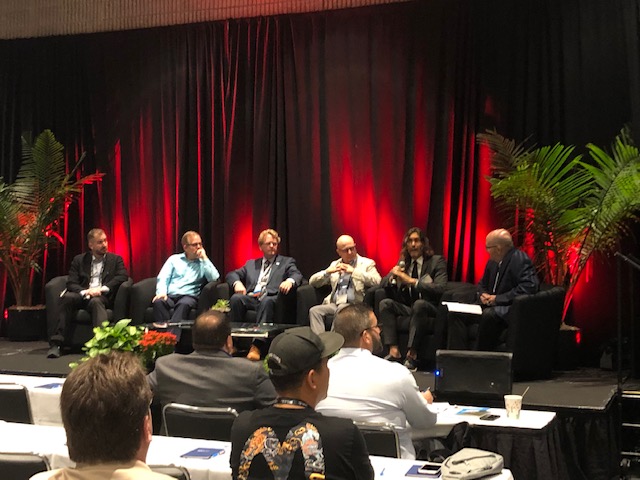 The Battle for the Wall was the opening panel discussion today during the Glazing Executives Forum in Atlanta, which takes places as part of GlassBuild America. Panelists represented the code, architect, manufacturer and glazing contractor communities, and addressed the impact initiatives such as the New Green Deal in New York City could have on the glass industry. They included Nick Bagatelos, BAGs Inc.; Roberto Bicchiarelli, Permasteelisa; Paul Bush, Vitro Architectural Glass; Tom Culp, Birch Point Consulting; and Steven Rainville, Olson Kundig.

Regarding that ban on glass, panelists had a lot to say.

“Everything has to start with codes,” said Bagatelos. “We have to drive the innovations into the codes. As more innovation is used (for example VIG) it will drop the prices rapidly.”

Bush sees this attack on glass in New York as a real opportunity.

“This is an opportunity for the industry to see these products installed–not valued engineered out at the last minute–and the products will be used.” The challenge is to undo some of the negative spin that occurred following the comments from the New York mayor.”

“Washington State passed a state law that basically does the same thing,” he said. “It puts in electric, fuel and carbon targets that must be met. But when you dig in, it’s not bad you just have to leave in the thermal breaks, the argon, etc. you can’t value out the high performance features. But a key part is also existing buildings … that will spur all these old buildings to upgrade their facades. It’s an opportunity for us, but we can’t let them get away with value engineering.”

Rainville says unfortunately the façade is the first thing to get picked at.

“We try to be innovative and progressive with the facade only to see it picked at by the contractor,” he said. “We get pushed back on the bottom line.”

The discussion also centered around what the next five years will bring.

“There will be a major shift from stick construction to unitized,” said Bagatelos. “And when you unitize you can implement electrochromic or VIG, etc. better than you can in the field, more cost effectively and with better quality control.”

Bicchiarelli said his company has invested deeply into 3D modeling and told attendees to expect to see integration of the façade with the mechanical aspects.

Culp’s hope for the next five years is that the developer will start thinking how the building will operate in the next year.

“As soon as you finish a new building and walk away it is now an existing building,” he said. “But how do we get that message to the developer and not just the architects?”

Rainville added that the industry has to push to raise the bar.

“As an industry we have great products out there and we can meet these new codes we just need to move forward and embrace that and along the way have to mitigate the risk and that involves working with established players,” said Bush.

“From the architects’ perspective, push as much as you can to raise performance–we are always looking for options, and we are dying to get something that looks different that’s cost effective,” said Rainville. “Push, innovate and have more options out there so architects can advocate for it with owners.”