Fire Protection and Other Trends on Display at Construct Show 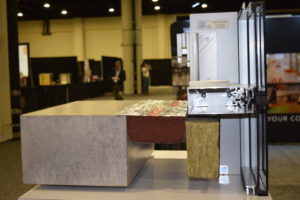 The Construct show provided glass companies a chance to show off their latest technologies, including products for fire protection and those that make installation easier. Construct, sponsored by the Construction Specifications Institute, is an architecture, engineering and construction (AEC) educational and expo event being held at the Gaylord National Resort & Convention Center in National Harbor, Md.

Fire protection is a major theme on the show floor. Safti First is focusing on its SuperClear 45-HS-LI, which was launched earlier this year. Marketing assistant Katherine Chan said the 45-minute, fire-protective product can be used to replace ceramic fire-rated glass products in doors, sidelites and transoms. She explained that architects like this product due to its low-iron makeup which offers clarity compared to the yellow tint of ceramics. Chan also pointed out that architects have been interested in the 60-minute and higher fire-resistive glass products which can be used to replace a wall.

Kingspan’s QuadCore is a hybrid insulation core technology for use in the building envelope for thermal performance, fire protection and health and wellness certification. The product is tested to NFPA 285 and CAN/ULC-S102.

Hilti is showcasing its CFS-EOS QuickSeal slab edge fire stop solution. It seals building perimeter gaps by filling the void between the floor slabs and the exterior curtainwall. 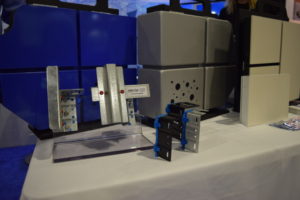 Northern Facades has a new 2-inch ISO Clip, a thermal barrier separating the interior of the building from the exterior framing components.

Northern Facades has a new 2-inch ISO Clip, a thermal barrier separating the interior of the building from the exterior framing components. The 2-inchversion of the clip can be used for smaller cavities, which technical sales representative James Keays said is unique to the U.S. market. Keays described the new clip as adjustable, strong and easy to install.

Easy installation is also a focus for dormakaba, which recently introduced its new DG1000/DG1100 glass panic hardware. The panic system is adjustable both vertically and horizontally so that glazing contractors don’t have to be as specific with their hole placement, according to estimator Lynn Lynch.

Lynch also explained that hydraulic patch closers are a growing trend in hardware because they eliminate the need to have to dig into the floor. It acts as one entity rather than two or three products. She pointed out that demountable wall products are increasing in popularity because they can contribute LEED points to a project. Demountable systems are not permanent and can be removed and reused elsewhere. 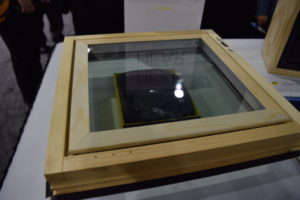 Pella Corp. demonstrates the ability of its triple-pane, wood-clad window to block sound in houses with noisy streets.

Glass for sound attenuation was another product seen on the Construct show floor. Pella Corp. is demonstrating the ability of its triple-pane, wood-clad window to block sound in houses with noisy streets. Charles Solomon, part of the commercial division for Pella Mid-Atlantic, said that aside from acoustical glass, he expects fiberglass windows to grow in popularity.

“It’s truly the material of the future for windows,” he said, adding that fiberglass has better impact and scratch resistance and better thermal efficiency than aluminum. He said the material can also reach Energy Star ratings and is not impacted by extreme temperature changes.