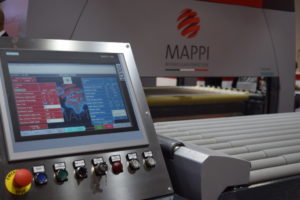 New machinery and technical innovations abound on the Vitrum show floor at the Fieramilano in Milan, Italy. Companies are showcasing increased automation and Industry 4.0 through machinery and software updates as the worldwide glass industry continues to adopt these technologies to increase efficiencies and save on labor costs.

Mappi has entered into a partnership with Siemens to use its MindSphere software system. The cloud-based system will allow its customers to track energy management and production data. It can be connected to a computer or phone, providing real-time consumption and production data. Automation manager Giulio Dalla Costa said that the company’s existing machines can be upgraded to include the software due to their flexibility. 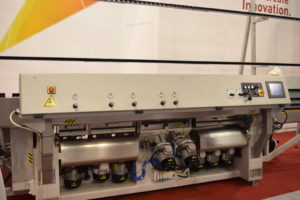 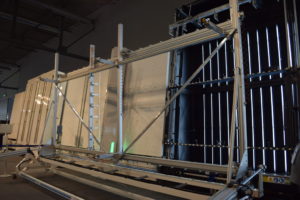 Forel showcased a few of its new machinery solutions, including the Art.FA large size frame applicator and the Art.SS sorting system. Frames can be assembled directly on the applicator horizontally. Then the machine tilts the glass vertically and the frame adheres to the glass surface due to a localized pressure system. The glass can then be placed on a vertical line. The applicator can be used with glass as large as 236 by 130 inches and as small as 118 by 59 inches.

Forel’s sorting system organizes and manages glass lites until they are ready to be moved to another line or process. This reduces operator risk and glass waste. The company works with customers to create a layout that works with their current operating flow.

Automation was also a theme at Schiatti Angelo’s booth. The company is celebrating its 50th anniversary and how far it’s come technologically during that time. According to Pete DeGorter, manufacturers agent for DeGorter, Schiatti’s distributor, the company has added a self-adjusting diamonds feature, which he said removed operator influence. It automatically adjusts the machine according to the ware of the diamonds. The operator will receive notifications about the adjustments. 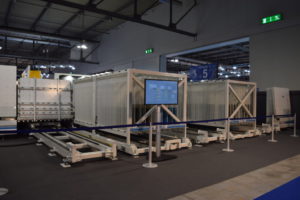 DeGorter is also a distributor for Pujol, which is highlighting its new chemical tempering oven at the show. DeGorter said it’s able to temper thin glass that can’t be tempered by thermal ovens. DeGorter expects chemical tempering to become more popular within the glass industry as thin glass becomes increasingly in demand for digital storefront applications. The company’s new Pujol 100 continuous oven can produce a batch every 19 minutes.

Evalam CIR was another focal point of the Pujol booth. The EVA-based interlayer has many of the same performance characteristics of low-E glass, according to DeGorter. It is laminated between two lites of glass and two EVA layers. It allows 90% of visible light to pass through the glass while maintaining clarity, unlike traditional low-E coatings, according to DeGorter, who adds that it blocks UV and infrared rays.

“The demand for laminating machinery is increasing. The growth in that sector is massive and we expect it to continue to grow,” said DeGorter, who explained that many fabricators are now completing jobs spec’d before new codes were implemented a few years ago. He also said that the barriers are fewer and investment costs lower, allowing smaller companies to enter the market. 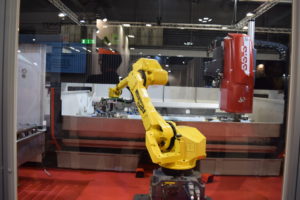 Intermac’s Master 33.3 machining center can be used with a ROS robot to increase production efficiency.

Intermac is entering into a new market itself, and is now producing washing machines. Its Aqua range consists of a series of vertical washing machines which can be integrated with the company’s Vertmax vertical machining centers. Director of product department Matteo Traini said the advantage of this new washing machine series is that customers can have a complete cell made by Intermac that is completely integrated.

The company’s Sophia platform has new features, including preventative maintenance capabilities and the Sophia calendar, which allows operators to schedule maintenance actions manually or semi-automatically.

Intermac’s booth also features the Master 33.3 machining center in conjunction with a ROS (Robotically Operated Systems) robot. The machine also features helix technology, a tool that can create up to 95% of hole sizes.

Vitrum runs through Friday, October 4. The show will return to Milan October 5-8, 2021.

1 Response to From Automation to Lamination: New Innovations Take Over Vitrum Show Floor