Vitrum continued in Milan, Italy, today with companies showcasing new solutions that improve processing efficiencies. A seminar on what’s trending in glass included a call to action for the industry to come together. 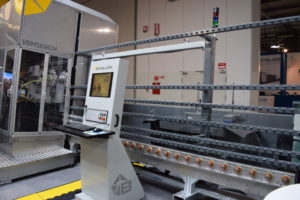 Bavelloni’s booth included a dedicated section for its tools company. The tools are available for attendees to see and touch and experts are there to answer questions. The company recently became a majority owner of Yalos, creating the company Yalos Bavelloni Srl. The company has an HW2600 stainless steel washing machine on display. Sara Tacchino, manager of marcom and sales support, said the washing machines are for sale immediately. The company is also highlighting a new function for its CNC vertical drilling machine. It can now process parallelogram shapes and create notches and holes on irregular shapes. This can be used for applications such as balustrades and stair railings. 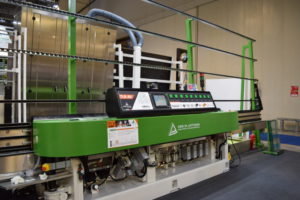 Adelio Lattuada is increasing its automation capabilities with motorized spindles on its TRL AV-11 straight line edger. According to Lattuada North America technical service manager Joseph Gates, now an operator doesn’t have to look under the machine to make sure the 11 spindles are functioning properly. The operator will receive alerts when it’s time for them to be adjusted. Gates said that when the machine is installed it comes with several recipe selections. The operator just needs to select the thickness and the machine will set the parameters.

“I hope people in the U.S. find it as interesting as I do,” said Gates, adding that the company can automate make any of its 38 models.

The company has also increased the speed of its robot solution for loading and unloading glass. In the past it took an average of 12 seconds. By changing the direction in which the robot moves the company was able to reduce that to 8 seconds, leading to faster production times.

Gates said the demand for automation is increasing as labor continues to be hard to find. 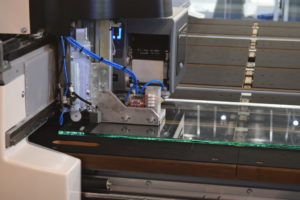 Bottero is also working to increase efficiencies. The company’s 363 BCS float cutting machine has now been integrated with a labeler. Manufacturers agent Hatem Abu Zannad said that in the past the glass would be cut and then moved to another machine where the label would be added, creating a bottleneck.

“It took eight minutes per cycle,” he explained.

Now the label printing machine is attached to the head of the cutting machine. 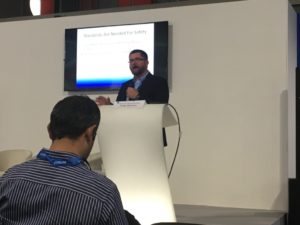 GlassRenu COO Cody Thomas calls for a universal standard for glass repairs during the seminar “What’s Hot in Glass for 2020.”

During the seminar “What’s Hot in Glass for 2020,” GlassRenu COO Cody Thomas called for a universal standard for glass repairs. He said that as glass repair technology and techniques have improved the demand for new ways to mitigate and remedy damage have also increased. Thomas explained that repairing glass can save money by reducing the need to throw away unacceptable glass while also being more environmentally friendly. He said this has become more important with larger, more complex and customized architectural glass that is expensive to remake.

He is calling for the industry to come together to create testing guidelines on damage identification and to create a standard to measure the quality of repairs and their impact on glass. Thomas explained that a standard would also lead to consistency in training.

“If we don’t create a standard as an industry another will … then it will be that much harder for our industry to lead the way,” he added.

Vitrum runs through Friday, October 4. Stay tuned to usglassmag.com for our continuing coverage of the event.