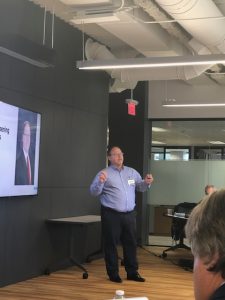 The AGMT session began with opening remarks from committee chair Chad Dalton with District Council #3 of the International Union of Painters and Allied Trades, who commented that the group has put a program in place that any glazier would be proud of.

Jeff Dalaba, NACC program general manager, led a testing update, pointing out that 257 individuals have taken the test so far and, of those, 165 have passed, which gives the program a 64% passing rate. It has an 82% passing rate after re-test. Currently, there are 211 certified glaziers.

In the pipeline, there are 65 applicants who have not yet completed the pre-requisites, 70 candidates who haven’t tested and 46 who are waiting to re-test.

Candidate feedback on the program has also been positive based on results of a survey of those who have taken the exam. Through the results they were able to learn more about how those who took the course not only prepared for it, but also how they felt about details such as the exam itself and the examiner performance, among others.

Some of the results showed, for example, that candidates spent one to five hours preparing for the exam and, as far as difficulty, the majority said it was neither difficult nor easy. Those taking the survey also said examiners’ performance exceeded their expectations.

One of the most important findings, the survey found, is that 100% said they would recommend the course to another glazier.

The committee also discussed some of the challenges they’ve faced. One example they discussed was third-party use of the certification mark, i.e., companies wanting to put the mark on t-shirts for their certified glaziers. Dalaba stressed that since they don’t want to water down the use of the mark, they created an avenue to allow the use of the mark without diminishing what it represents. Through these efforts, AMS has to approve the use of the mark.

The group also discussed what could be barriers to certification for some people. For example, taking the exam requires time away from the job; it’s typically a two- to three-day commitment. Other concerns could be proximity to testing, scheduling re-tests, etc.

Dalaba explained there likely isn’t just one solution to address every concern, but possible opportunities could include open event sponsors/neutral locations and/or mobile examinations.

During the NACC session, committee James Bringle, with Empirehouse, shared that his company is the only NACC certified glazing contractor in the Midwest.

“We have great contractors in our area, but we need to get them certified to get them to the same level,” he said. Currently, there are 26 contract glazing firms that are NACC certified and there are 19 in the pipeline.

Dalaba said the program can be a wake up/call to action for many contractors, as it can be a culture shock to an organization when looking at everything they have to do as a company.

“It causes a contractor to put in place policies and procedures toward problem resolution and team work … prepping for this assessment causes employees to talk amongst each other to figure out how to do it as a team …” he said.

Looking at contractor ongoing performance, the biggest focus areas are quality and safety. As Dalaba explained, it tends to be the office/behind-the-scenes aspects where companies tend to struggle.

Looking at procedural guide updates, they have made some changes and additions, including two new categories: service work and guardrails. There was also some discussion about the potential addition of an interior glass category/other specialty categories.

The group also covered some of the challenges ahead; quality management systems continues to be the biggest focus. The group discussed how these concerns can be addressed. Examples covered included a possible root cause analysis, having a quality manager, consultant or developing a mentorship program. The group agreed that a mentorship program has a lot of potential, as facilitating an ongoing conversation is helpful.

John Kent, AMS president, stressed that NACC is a program customized to the glass industry.

It was also noted that as a third party, AMS, which oversees the two AGMCC programs, cannot consult/tell organizations how to meet that requirement.

The AGMCC will hold its next meeting in 2020.