AGMCC Programs Continue to Raise the Bar to Better the Industry 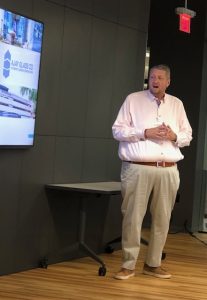 AGMCC president Jim Stathopoulos with Ajay Glass talked about the progress the programs have seen since their beginnings.

Jim Stathopoulos, CEO of Ajay Glass and AGMCC president, opened the sessions on Thursday afternoon, reporting that they’ve had a great ride since their beginnings about five years ago.

“Today we have approximately 27 certified contractors and 15 in the pipeline,” he said. “We hope to be at 35 [certified] by the end of the year. It’s really starting to take off,” he added, explaining that the growth is thanks to the interest of those participants attending the meeting that the program continues to grow every year. “It’s a tough process, it’s demanding and it’s worth it.”

One of the biggest accomplishments, he said, is that the program is now included in MasterSpec for installer qualification. “That’s a phenomenal accomplishment,” he said.

Rodney Harvey from CDC pointed out that his organization is a believer in this program “… and think it’s long overdue for this industry … The commitment and involvement you guys have made have really gotten it rolling … in a short period of time.” 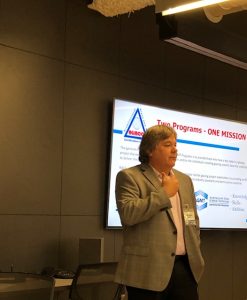 Jeff Dalaba, NACC program general manager, next gave an overview of what the group has been doing and working on, describing these efforts as an “initiative.”

“We want to update you here [at this meeting] and show you we’re managing things well; we want to hear from you on the challenges and opportunities you see on your side.”

According to Dalaba, regarding the AGMT program, the program is off to a strong start and “… the comments we get back from those who are certified absolutely confirm we’re doing the right things.”

He continued, “The mission is to provide programs to raise the bar for the industry.” The NACC, he explained, is reducing risk for stakeholders and providing a mechanism to mitigate the risk. Likewise, the AGMT is focused on minimizing construction defects through demonstrated competency.

When looking at the growth of the AGMCC, Dalaba said the programs are not only innovative, but are moving the industry forward. This initiative, he said, is working toward improving performance, measuring performance and reducing risk and creating a track on which to run the systems.

Speaking of programs, he explained they do set a high bar and it has challenged the status quo.

“It’s a way of recognition … are we going to remove every risk? No that would be impossible.” There was a discussion a while back, he said, questioning whether the group should make the program less challenging just to get more contractors, but they didn’t lower the bar.

“We kept it high. There was a strong commitment; if we’re going to do it let’s do it right. This is the gold standard, not the bronze or silver standard,” he said.

Looking at the NACC, Dalaba explained this program is an assessment of company and management systems that operate across five components: safety, business practices, quality, contract administrative processes and glazing processes.

“Quality is by far the biggest hurdle … you have to continue to press that the instructions are followed,” he said. “There are too many pieces in a building system that allow for room for error.”

“The telling piece is before we started marketing this we had 18 certified, but we only had one application,” he said. “This has just gone to the next level.”

AGMT has also seen a lot of activity in the past year. Since the program went live it has tested in 11 locations across the U.S, and has conducted 257 exams. Of the 257 tested, 165 passed the test on the first attempt—that’s a 64% passing rate. Likewise, it has an 82% passing rate after retest. The program currently has 211 certified glaziers.

The program consists of a knowledge based test (KBT) and a performance based test (PBT). The PBT is broken down into three sections: curtainwall, storefront/entrances and sealing. Each of those has a certain number of subsections.

The AGMCC Annual meeting continues through Friday in Dallas.