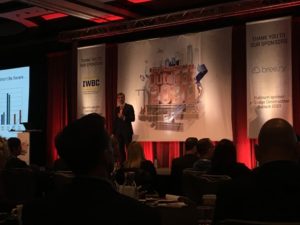 Are we heading into a recession? That was the question on many people’s minds at the 81st Annual Dodge Construction Outlook Conference in Chicago yesterday as economic growth begins to slow. The answer is that a recession is not likely within the next 12 months, according to two economists, but a slowdown is headed the glass industry’s way.

Dodge Data & Analytics released its 2020 Dodge Construction Outlook report at the conference, which predicts that total U.S. construction starts will slip to $776 billion next year, a 4% decline from the 2019 estimated level of activity at $808.7 billion. Commercial, multifamily and single family construction starts are all expected to fall back next year while the institutional segment is expected to remain the same.

Multifamily construction was an early leader in the recovery, stringing together eight years of growth since 2009. However, multifamily vacancy rates have moved sideways over the past year, suggesting that slower economic growth will weigh on the market in 2020. Multifamily starts are slated to drop 13% in dollars to $78.5 billion and 15% in units to 410,000.

Retail has struggled as the market has shifted, according to Dodge chief economist Richard Branch, who said that the lack of suburban single family growth has impacted the demand for big box stores such as Walmart. That paired with an increase in the online sales market and retail being incorporated into mixed use construction has stalled new construction in retail. However, much of retail activity is now focused on renovations, which make up 40-45% of all retail starts.

“There’s an opportunity as far as recapturing the renovation side of the market,” said Branch.

With many retailers focusing on warehouses and distribution over brick and mortar buildings, warehouse building starts have hit record-setting levels. However, the segment is expected to fall back 10% in 2020 to $22.8 billion.

Education starts are forecasted to grow 2% in 2020 to $65.7 billion, driven largely by K-12 construction. Branch pointed out that Gen Z is smaller than the millennial generation, which should impact the segment’s growth in the future. Healthcare starts are also expected to rise, with a forecasted 3% increase to $28.6 billion. Hospitals are pulling back while clinics and nursing home construction is growing across the U.S.

Recreation starts fell 9% in 2019 and is expected to fall another 8% in 2020 to $17 billion. U.S. public building starts hit a peak in 2019 and are anticipated to fall 1% to $10.4 billion next year. Lastly, transportation will also pull back, with an expected 5% drop to $12.8 billion in 2020. However, the segment will remain robust due to several airport renovations.

Christian deRitis, deputy chief economist with Moody’s Analytics, gave an overview of the overall U.S. economic outlook heading into next year. According to his probability of recession model, a recession is not likely within the next 12 months. He said that while financial variables such as the stock market, yield curve and futures are providing a more negative economic outlook, economic variables such as the labor market and housing, which he says correlate more closely with previous recessions, are more positive.

“There’s no need to panic right now, certainly. The data isn’t suggesting that things are falling apart but there is elevated risk. A recession in the next 12 months is highly unlikely so rest easier in the short term,” said deRitis.

He pointed out that many business investments have been stalled due to uncertainties over trade and Brexit; however, consumers have kept the economy going with a 2% growth rate.

“The labor market has been a driver of that consumer confidence. If the job market is strong they will feel confident and spend,” he said. “We have more job openings than people looking for work.”

deRitis said the tariffs, a stock market correction and a leveraged loan meltdown are the current major threats to the economy. However, when the recession eventually hits, he expects it to be short and not severe. His model did not incorporate policy, which is unpredictable and could impact the economy. deRitis said that with recessions come opportunity and he recommended that attendees get ready to take advantage of those opportunities.