From Green Space to Green Roofs, Zak Conference Delves into the Future of Facades

Do you have cravings for junk food? Are you unusually tired or stressed? You may need a dose of biophilia—that’s a connection or interaction with nature. According to Annissa Flickinger, international architectural manager with Vitro Architectural Glass, a daily dose of biophilia could be the cure. Flickinger was one of the presenters yesterday during the Zak World of Facades conference, which took place in New York. Many others also took the stage to discuss a variety of façade design trends and future developments.

She also offered a look at some of the Vitro projects that have incorporated biophilia design. One of the most recent is the Jewel Changi Airport in Singapore. The glass biodome is not only filled with plant life but the world’s tallest indoor waterfall at 130 feet.

As she explained, stepping off an airplane into an environment such as this allows you to escape the draining and sensory overload that comes with air travel “…Immersing yourself in nature for ten minutes can help improve your mood,” she said.

Another project example she pointed out is the Amazon Spheres in Seattle. The glass domes are filled with more than 40,000 plants, creating a place for employees to think and work, surrounded by nature.

“Tech companies are embracing biophilia design in their workspaces,” she said. 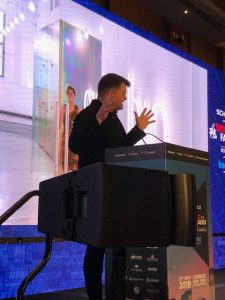 Kai-Uwe Bergmann with BIG Architects spoke during the Zak World of Facades conference about changes he sees in the future for facades.

If you’re wondering what’s in store for the future of architectural facades, the Danish firm BIG is one that’s pushing those boundaries every day. Kai-Uwe Bergman, a partner with BIG, spoke yesterday on Formgiving: giving form to the future.

Before diving into his session, he praised the work of the Zak conferences

“I love this conference. Since its arrival the actual discussions and conversations we’re having about facades, about making buildings, have been elevated globally,” he said.

That took him to the focus of his presentation and something his firm calls the BIG LEAP, an acronym for Landscape, Engineering, Architecture and Products.

As Bergmann explained, they’re working to bring in a level of holistic design, and not just from a specialist lens. He pointed to the Via 57 project in New York as an example that characterizes the BIG LEAP.

Bergmann also said that they have been increasingly challenged by Google; they are currently designing eight buildings with the tech company.

“Google has impacted our approach to how to integrate–thinking, sensing, moving,” he said. For example, before starting a project they do a lot of research, i.e., thinking. This research can be done through Google (maps, site elevation, historical views, etc.).

Speaking of sensing, he said they have been exploring the possibilities of using AR/VR technology to create a visual sense of space.

“The price point is such so that you can see it entering real estate world, but currently it’s more of a marketing tool,” he said. “We’re putting in an effort to integrate it into a design space.”

For example, when designing a feature into a project that’s never done before, such as having a green space on every floor in a New York tower, AR/VR can help you better understand that.

Finally, he said, is designing with an eye toward moving. For an Amazon tower in Berlin, they’re incorporating a next generation of elevator technology.

“It will not only move up and down but also sideways,” he said. “It’s specific to this building because the city requires it to have public-accessible rooftop… different people need access to different floors at different times.”

Bergmann added that the way they think of designing buildings is entirely based on how we move.

“We are always moving and thinking about how transportation will impact cities,” he said. Such an example is the Hyperloop, a proposed mode of passenger and/or freight transportation that would be practically as fast as air travel. BIG’s Hyperloop concept would link the cities of Dubai and Abu Dhabi in just 12 minutes, rather than a typical 2.5-3 hours.

“The future is around us every single day, it’s about bringing [everything] together and connecting them to the projects we’re working on,” he said.