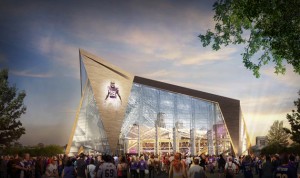 U.S. Bank Stadium in Minneapolis is the focus of another study about bird collisions. According to the study, titled “Factors Influencing Bird-Building Collisions in the Downtown Area of a Major North American City,” U.S. Bank Stadium and three high-rise office buildings in the city accounted for 68% of estimated fatalities in the periods monitored in 2017 and 2018 (March 15-31, June 1-30 and August 15 through October 31 of both years). Estimated fatality rates for these buildings ranged from 79 to 216 fatalities per year, with the stadium accounting for 111 per year.

The estimated fatality rates for the top buildings exceed the rates at the majority of U.S. high rise buildings, according to collision data from 11 cities. However, several large and/or glassy buildings have been shown to exceed these rates, such as the McCormick Place Convention Center in Chicago with an average of 1,028 fatalities per year from 1978 to 2012.

According to the study, not only does U.S. Bank Stadium cause a large portion of bird collisions, one particular façade caused most of the collisions with the stadium. The study reports that 52% of all bird collisions at the stadium occurred at the 64,500-square-foot expanse of uninterrupted glass on its northwest façade which faces an open park. Seventeen percent of collisions occurred at the southwest façade and 11% occurred on the northeast façade. U.S. Bank Stadium has approximately 193,750 square feet of highly reflective glass.

When analyzing the causes of collisions at the 21 buildings studied, glass area and vegetation within 50 meters were included as some of the top causes.

“Our results nevertheless suggest that large glassy buildings with extensive nearby vegetation or park space cause the greatest numbers of collisions. Past studies at a variety of building types have also shown increases in bird collisions with greater building height, area and/or percentage of windows or glass and vegetation near buildings,” reads the study.

Glass area can lead to bird collisions due to several factors, according to the study, including greater confusion of birds due to larger amounts of reflective and/or see-through surfaces. This is especially true when the glass is featured in large, unbroken expanses. An increase in light emission increasing numbers of nocturnal migrants attracted to buildings is another factor.

“Retroactive treatment of existing stadiums should also reduce collisions, and regardless of the approach used—whether it be installation of bird-friendly glass, application of film, markers, netting or other materials over existing glass, or some other approach—in-field monitoring and validation of the effectiveness of different approaches is needed to clarify which mitigation steps work best for different types of glass, buildings, and surroundings (e.g., heavily vegetated vs. non-vegetated),” concludes the study.

The study also indicates that a major reduction in bird collisions can be achieved by focusing mitigation efforts on a small number of especially problematic buildings as well as particularly problematic spans of glass.

This isn’t the first time a report has examined bird collisions at U.S. Bank Stadium. The Audubon Chapter of Minneapolis released a report in 2017 observing bird mortality and injury at the complex during the fall 2016 migration season. Monitors in that study recorded 60 birds killed and another 14 stunned due to collisions with the stadium’s glass façade.

Conservation organizations had called on the project team to implement bird-friendly design elements since the building is located in a migratory area, but these weren’t followed through due to financial constraints according to the Minnesota Sports Facility Authority (MSFA), the managing body of the stadium. The MSFA also contended that the stadium design and budget had been completed prior to conversations with the Audubon and prior to changes in state guidelines related to bird-friendly glass. Conservations later called for a retrofit solution, such as bird-friendly film, to be applied to the glass.