This week San Diego is home to Glass Expo West™ ′19, where glass, metal and glazing industry professionals are gaining insights into relevant topics such as the state of the regional economy, graphic imaging, railing codes, industry disruption and search engine optimization (SEO).

Wednesday began with the “Glass and Glazing Industry Economic Update” presented by Key Media & Research director of research Nick St. Denis. While nonresidential construction spending flattened out in 2017 after several years of strong increases, St. Denis projects a 4% increase for the sector in 2019 and a 2% increase in 2020. 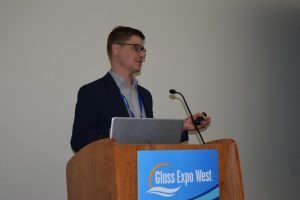 Key Media & Research director of research Nick St. Denis gives an overview of the economic state of the Western region.

Office construction had been a major driver of this sector but with vacancy rates on the rise and the sector maturing, there is slower growth in the office sector. Retail construction has been slow due to the shift in online shopping; however, this has brought an increase in warehouse construction.

“That’s unfortunate for glass and glazing companies because they’d rather install a storefront with expansive glass than a punched opening in a warehouse,” said St. Denis, who added that store alterations have been up in the last couple of years.

The institutional side of nonresidential construction has become a stronger driver than commercial in recent years due to the increased spending in the educational and healthcare segments. St. Denis explained that after a recession the commercial side grows quicker because it’s based on private spending, whereas the institutional side takes longer to pick up speed due to contracts and public funding.

Multifamily construction, which led the way after the recession, has leveled out recently after years of double-digit increases at the beginning of the decade. St. Denis said the strong state of the economy has helped out the single family side of residential building.

Looking at the Western region, St. Denis said that despite strong construction employment the numbers still aren’t at the pre-recession levels of 2006. However, California makes up a large portion of the contract glazing focus. According to St. Denis, the state makes up 12% of the country’s population but 17% of the top 100 U.S. contract glaziers are headquartered there. Of the top 100 contract glaziers, 22% of their total locations are in California.

St. Denis surveyed glass fabricators and manufacturers about their expectations for 2019 sales vs. 2018 sales and almost 50% expected an increase of 10% or more. He also explained that many companies have been and plan to continue to raise prices due to increased costs on their end caused by the cost of freight, the labor shortage and increased materials prices.

Search engine optimization can be an important tool for companies to drive business. Glass.com® operations manager Daniel Snow spoke about how glass shops can use SEO to improve their Google listing in the seminar titled, “How to Make Search Engine Optimization Work for You.” 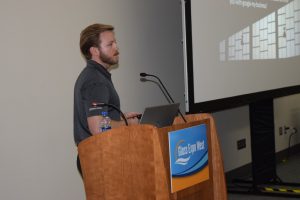 Glass.com operations manager Daniel Snow explains how companies can use search engine optimization to their advantage.

He emphasized the importance of appearing in what’s called a local 3-pack, a listing of three local, relevant companies that meet a search query. To make this list companies must have a Google My Business account. Companies can optimize their business listing by including their company name, relevant categories, address, phone number, photos, reviews and business citations.

When optimizing a local 3-pack Google takes relevance to the search query, distance and prominence online and offline into consideration.

To create more prominence Snow recommends that companies include their contact information in a footer so that it’s available no matter what page a site visitor is on. However, it’s important to have a separate contact page as well for people looking for it. Snow also recommends that a company have separate web pages for the different areas they serve so that they show up in searches for that area.

Website health plays a vital role in SEO. Companies should look at technical aspects such as speed, security and making sure the website is mobile friendly.

Having inbound links from outside, also improves a website’s quality and ranking. Inbound links are only useful if they’re from relevant, glass-related companies. Snow explained that Google looks at title tags, meta descriptions and headline tags for keywords. Google also weighs the quality of a website’s content and the word count (around 2000 is ideal).

Site over-optimization saturated with keywords is a practice companies should avoid, said Snow. They should also ensure that their IP address doesn’t come up as spam in emails.

One way to increase traffic while working on an SEO strategy is pay-per-click advertising. It can work in the short term while SEO is a long-term project.

Mark Jacobson, market manager for Kuraray, explained what’s new with glass railing codes and materials. He demonstrated the difference in strength and retention between flexible PVB and ionoplast. Ionoplast stays in a frame once broken and can still hold weight and act as a guard whereas flexible PVB could leave the frame. It’s also less likely to maintain its strength at 50 C.

In “C-Suite Changes Coming in the Contract Glazing Industry,” Schüco USA president Attila Arian discussed some of the disruptions that could impact contract glaziers going forward. One of those changes is the increasing role of the developer as general contractors move into construction manager roles.

Body language expert Janine Driver gave a keynote speech in which she outlined several tips to understand and use body language to increase sales and close deals.