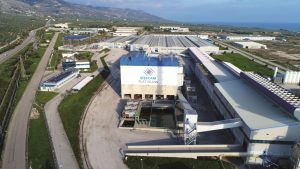 Şişecam Group has opened a plant in Manfredonia, Italy, its second flat glass investment in the county. The company, which had acquired and incorporated the Porto Nogaro plant in northern Italy in 2016, also completed the acquisition of the Manfredonia plant in Monte Sant’Angelo in June last year.

Due to the renovation and modernization investment done by Şişecam Group in a short time, according to the company, the flat glass production facility had become operational two months earlier than planned. The inauguration ceremony held on November 30, 2019 was attended by Italian Prime Minister Giuseppe Conte, Ambassador of the Republic of Turkey in Italy Murat Salim Esenli, President of Puglia Region Michele Emiliano and Mayor of Monte Sant’Angelo Pierpaolo D’Arienzo, as well as the guests and employees.

Conte said in his speech at the ceremony that the government always supports foreign investments.

“… Şişecam has come with a sustainable project both economically and environmentally, and taken an important step by putting this facility into operation. Şişecam Group will also be pleased with this investment,” he said.

Şişecam Group vice chairman and CEO Ahmet Kırman in his opening speech stated that the company continues to create social and economic value in all geographies in which it operates.

“Şişecam Group is one of the largest Turkish investors in Italy. And Italy is a special country for Şişecam with a population of more than 60 million, an economy reaching $2 trillion, and a long-established industrial history. The total amount of our investments in the country has exceeded [$166 million] as of today,” he says. “Our group operates in Italy with investments in chemicals, glassware and flat glass. Thanks to our operations in flat glass and exports from Italy, we aim to escalate the total sales revenues of our operations in Italy to [$221 million] in 2020 and to increase our contribution to the Italian economy.”

“We have launched the Manfredonia plant with the renovation and modernization investment that we have realized in a short time. Together with additional investments, we have invested more than EUR 55 million for Manfredonia, including the acquisition value and working capital,” Kırman added. “We have not only rebuilt the furnace with an advanced design in the facility opened today, but also managed to activate the coating and lamination lines. As Europe’s largest flat glass producer, we are proud to commission Manfredonia, our second flat glass production facility in Italy and third in the European Union, in a very short time as promised.”