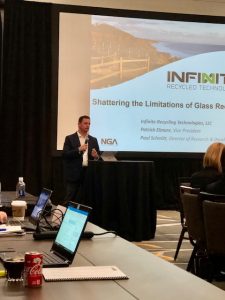 The National Glass Association’s Annual Conference began Monday in La Jolla, Calif., with a number of committee meetings and presentations. Sessions included an update on some of the forming committee activities, as well as a presentation on glass recycling.

During the forming committee meeting, NGA technical director Urmilla Sowell discussed recent legislation, California AB 262. The legislation requires state agencies to consider in its sourcing the Global Warming Potential (GWP) of “eligible materials”—including glass. As of January 1, 2020 awarding authorities in the state now require submissions of Environmental Product Declarations (EPD) on four materials, one being glass. Beginning January 1, 2021 the California Department of General Services will publish the maximum (GWP) of the products. By July 2021, award authorities will gauge GWP compliance of eligible materials with EPDs. Sowell explained, however, there is still a disconnect between flat and processed glass because flat glass is not the final product in the building, but rather processed glass.

Also during the forming committee update, Patrick Elmore and Paul Schmitt with Infinite Recycled Technologies led a presentation titled, “Shattering limitations of Glass Recycling.” Elmore began by pointing out that each year, 11 million tons of glass are disposed in the U.S. and will take one million years to breakdown in a landfill. He also provided a look at the alternative of recycling and explained that 30% less energy is consumed when recycled glass is used to make new glass and that 26.5% of the raw material used in glass production comes from recycled glass. He added there’s up to 50% less air pollution when recycled glass is used to make new glass products.

Schmitt spoke some about the opportunities in recycled glass, which can be used for a variety of products, such as bricks, pavers countertops and other products. His company has the ability to recycle glass, including PVB laminated glass, among others, into new and useful products.

One example he discussed was Structural Glass Polycrete (GPC), which he said is a structural substitute for actual concrete. He said it has five times the strength of structural concrete and up to 78% recycled glass and formulated recycled polymers. He also shared an example of how his company partnered with the Mayo clinic in Minnesota, taking its glass and plastic that was going to the landfill, running it through his company’s recycling process and producing stones, paver bricks, decking, etc., all made with recycled glass and plastics.

Sowell next discussed results of the NGA’s Recyclability Industry Survey. She explained that the survey was conducted because glass recycling has been something the group has been talking about as an industry. Results showed that most survey respondents so far are interested in recycling in the future. Roadblocks, however, include recycling not available locally. Sowell added that the ability for companies to recycle locally is something that will need to be discussed in the future.

Clear glass is the most commonly recycled, followed by tinted glass. The survey also showed there are a lot of companies not currently recycling who would like to do so. In addition, most companies that do recycle are not segregating the glass.

The survey is still open and is open to the entire industry, including both member and non-member companies. To participate contact Urmilla Sowell at usowell@glass.org.

The Annual Conference continues through Wednesday this week. Stay tuned to USGNN™ for more news and updates.