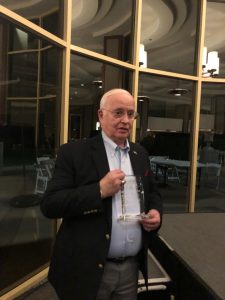 Bill Lingnell was recognized during the NGA’s Annual Conference with the C. Gregory Carney Award, the association’s highest honor.

Industry consultant Bill Lingnell of Lingnell Consulting was recognized with the C. Gregory Carney Award during the National Glass Association’s (NGA) Annual Conference, taking place this week in La Jolla, Calif. The award is the association’s highest honor and has been presented annually since 2014 to an individual dedicated to advancing glass and glazing, promoting its use and advocating—doing what is right for the industry as a whole.

In presenting the award, Urmilla Sowell, NGA technical and advocacy director, said that when Carney introduced her to Lingnell, he described him as “the go-to resource; someone who could keep things simple and easy to understand … with the tools to properly glaze the world.”

Lingnell and Carney worked closely on many projects, including the Glazing Manual and countless other resources and documents. Sowell said they had also worked together at what was then the Libbey-Owens-Ford Company, “and together advanced the use of proper glazing around the world.”

She added that Lingnell was “Greg’s hero and mentor. They were friends, partners and family over the years … they worked together for 55 years, two summers and one Christmas vacation … He is an incredible resource to the entire industry … he is an eager volunteer. He has a dedication and commitment to the glass and glazing industry that complement this award. Greg is beaming.” 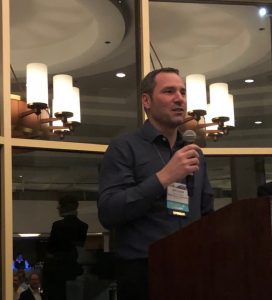 Sylvain Denis with Walker Glass received the Volunteer of the Year Award.

In accepting the award, Lingnell was very humbled.

In addition to the C. Gregory Carney award, Aaron Thompson with Viracon, who serves as the Fabricating Committee chair, presented the Volunteer of the Year Award to Sylvain Denis with Walker Glass. In presenting the award, Thompson said Denis was a person who doesn’t say no and has put together more than 25 glass technical papers.

In accepting the award, Denis said it’s an easy job.

“I just have the right people around me to help me,” he said.