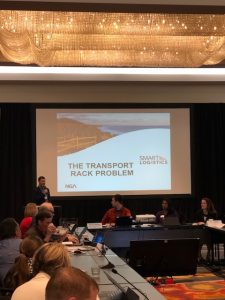 Tim Watson with Smart Logistics speaks to Annual Conference attendees about options for tracking glass racks after they leave the manufacturing and fabrication plants.

The Annual Conference continued yesterday in La Jolla, Calif. The program included committee meetings and discussions centered on many of the group’s current activities, along with a number of informative presentations.

Tuesday’s agenda was filled with the Fabricating Committee meeting, which was chaired by Aaron Thompson of Viracon. The meeting began with decorative segment discussions, which has been working on a number of documents. These include “Best Practices for Installed Decorative Glass,” chaired by James Wright of Fenzi North America; “How to View Decorative Products,” chaired by Michael Saroka of Goldray Industries; and “Measuring Color Variance” and “Defining Acceptable Color Variance,” both chaired by Sylvain Denis from Walker Glass. Denis is also chairing the committee developing a Decorative Glazing Manual, which he said is close to being finished.

In the mirror segment meeting Dave Evans with Guardian Glass provided an update on the “Green Aspects of Mirror” document, which was originally published in 2013. The new document is currently at ballot.

During the energy segment meeting, Sowell provided a Product Category Rule (PCR)-Life Cycle Assessment (LCA)-Environmental Product Declaration (EPD) update. She explained there are three PCRs. The PCR for flat glass, which expires in March 2020, is currently being updated. There is also a processed glass PCR, which expires in two years; and the windows PCR expires September of 2021. The Fenestration Glazing Industry Alliance (the combined American Architectural Manufacturers Association and Insulating Glass Manufacturers Alliance), Window and Door Manufacturers Association and the National Glass Association NGA are in discussions to update the windows PCR. The organizations have met and have received quotes from four different program operators. The groups will be going forward by bringing this information to their respective boards.

Also, an EPD for flat glass was recently published.

The group discussed the possibility of a document that would provide information on how to interpret/use EPD data. Members discussed the importance of providing education to the industry, for example, through a glass informational bulletin. This work is starting to get underway within the Forming Committee.

The Fabrication Committee meeting also included a presentation titled “Where’s My Glass Rack?” led by Tim Watson, CEO of Smart Logistics and David Gustafson, co-president. The session focused on the problem that many industry companies face in knowing the whereabouts of transport racks and how they can address the matter.

“This is a big issue for the industry,” Watson said, describing the glass racks as the “paper clips” of glass manufacturing; everyone has them, he said, but companies don’t really know what happens to them once they leave their facilities.

As Watson explained, despite the great work of manufacturers and fabricators, glass is still tough to ship. He said racks can have value of $500-$2,000, but they are uncontrolled.

“It’s just too hard to keep track of them,” he said. “We talked to companies and most everyone identifies some problem they have with the racks … it’s a $700 paper clip. They aren’t tracked, accounted for or managed,” he said. “It’s become a cost of doing business, just like a paper clip.”

But why is that the case? He said it’s because companies can’t control racks once they leave their facilities. “Racks spend 80% of their time outside of your facility … the net result is a 10-20% loss per year,” he said. “If you need racks to ship out [your glass and you don’t have them] you have to do whatever it takes to get the glass out … so transportation ends up really expensive.” This could include, for example, shipping half loads, and paying for expedited shipping. “The real killer is having to halt production because you can’t ship the order,” he added, explaining that rack challenges affect multiple business functions: finance, manufacturing, supply chain logistics and sales/customer service.

As a solution, Watson’s company has looked to wireless technology and the Internet of Things for solutions. His company has developed a tracking device that can be applied to glass racks, allowing the manufacturer or fabricator to see their exact location.

“Wireless technology is changing things … this evolution makes it possible to connect billions of things to the internet,” he said.

The technology is available through multi-mode processing, cellular, Wi-Fi and Bluetooth, and enables the rack owner to have continuous contact. The data is viewable through a web portal and is easily implemented in a company’s operations, he explained.

While the technology is available, Watson said it’s important to continue creating industry awareness, as well as to promote understanding. One possibility, he said, could even be standardization in the future.

In addition to committee meetings and informative presentations, the NGA also announced that its Annual Conference, along with its Fall Conference, will now both be named NGA Glass Conference. The two events will be differentiated by location.

The conference in La Jolla concludes today. Stay tuned to USGNN™ for more updates from the event.