Wall to Wall: The Differences in Installing Curtainwall and Window Wall Systems 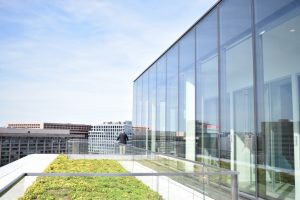 Glazing is an integral part of a building’s façade, giving occupants access to the outside world while protecting them from its elements. However, there are many differences between the various glazing types which impact performance and aesthetics. It’s important for glazing contractors to be aware of these differences and how they can impact installation.

A curtainwall is a glazing system that runs past the floor slabs, essentially hanging from a building’s front structure, whereas a window wall system sits between each floor’s structural elements. According to Crawford-Tracey Corp. owner Ray Crawford, curtainwall configurations are usually 4 to 5 feet wide and 14 feet in height or taller. Window wall panels are often smaller since the system does not have to span the area in between floors.

Russell South, project manager for Giroux Glass in Los Angeles, says storefront systems, which are used for first floor applications, typically are 10 to 12 feet in height. Window wall usually is installed beginning with the second floor with a storefront system on the ground floor. Curtainwall systems can be used on any floor.

Storefront and window wall systems drain water differently than curtainwall. South says that on a curtainwall system, the water drains out of each individual lite so that each horizontal on a multi-span building drains water. For storefront systems, the water goes into the horizontal before being transitioned down the vertical and out the sill at the bottom.

“When you’re doing more than one floor you don’t want to use storefront because it will take on a lot of water and you don’t want all that water running down the verticals,” says South “Also, since curtainwall is more robust, it works better for windload issues because it has a deeper mullion.”

“Since a window wall system is sitting in between the floor slabs the slab edge cover will create a significant reveal at the floor slabs,” says Harrington. “This isn’t a design element of curtainwall systems, which are much sleeker. It’s less apparent where the floor slabs are [located.]”

Storefront and window wall typically are less expensive than curtainwall. One aspect that can contribute to the cost difference is that there are more glazing contractors capable of installing multi-floor window walls.

“This opens up competition to a wide variety of glazing contractors and the competition can help keep costs down. The more sophisticated a project, the fewer the contractors that are able to bid it,” says Harrington.

To read the full article, which originally appeared in the December 2019 issue of USGlass magazine, click here.