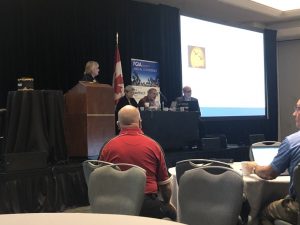 Kathy Krafka Harkema tells attendees of the ambitious energy proposals that may work their way through Congress.

“Following regulatory issues right now is like doing the Texas two-step,” said Kathy Krafka Harkema, U.S. codes and regulatory affairs manager for the Fenestration and Glazing Industry Alliance (FGIA). “When they move, they move faster than I have seen in my life,” she added, when addressing members this morning during a meeting of the Regulatory Steering Committee.

As part of FGIA’s Annual Conference this week in Fort Lauderdale, Fla., Krafka Harkema moved through a rapid-fire presentation to update members on everything from energy to trade and even the novel coronavirus. She informed attendees that the Occupational Safety and Health Administration (OSHA) has guidance on its website regarding how to prevent the spread, including regulations for personal protective equipment (PPE).

“It is now a recognized hazard,” she said. “It is something for you to think about. It’s always better to plan ahead concerning how you would deal with this if someone at your workplace came down with this.”

Also on the OSHA front, she noted that the administration has new ways for categorizing amputation data, while reporting an increase in the number of inspections. “In 2019, they conducted 33,401 more inspections—more than in the previous three years,” said Krafka Harkema.

When the conversation turned to energy, there was a great deal to report, as some groups have ambitious targets in mind.

The California Air Resources Board (CARB), for example, is placing significant funding into research examining how volatile organic compounds (VOCs) and emissions might be reduced—to which about $5 million is allocated in California, Krafka Harkema explained.

She also informed attendees that there are proposed changes to the U.S. National Environmental Policy Act, which hasn’t been updated since 1978, she said. “The proposed changes will help simplify this program,” she said, in turn bringing practicality to environmental decision making, she added.

Krafka Harkema also informed attendees about the U.S. Clean Future Act—a piece of legislation that she said is “being shopped around.”

The legislation would also propose a Buy Clean program, and has an overall goal of reducing greenhouse gas emissions.

“They want to influence building code revisions to achieve zero-energy-ready buildings by 2030,” she said. “Folks, that is only a few code cycles away.”

Legislation would also include measures for reducing building and vehicle emissions. Future hearings will be held by the U.S. House Committee on Energy and Commerce.

Moving to the Environmental Protection Agency (EPA), President Trump is proposing a more than 20% reduction in budget for the agency in the next budget cycle. “What this means for us is not many new programs for the EPA,” said Krafka Harkema.

Energy updates even included talk of what U.S. presidential candidates are proposing. “You hear the candidates talking about a proposed U.S. Green New Deal legislation that was introduced in the Senate in February 2019,” she said. “It hasn’t progressed on either the House or the Senate side.”

Candidate Mike Bloomberg has an ambitious energy plan as well, she reported. “He proposes that by 2025 all cars will be electric and will cut all carbon emissions by 50% by 2030,” she said.

Before Marg Webb, glass products and Canadian industry affairs director at FGIA (formerly IGMA executive director), gave her regulatory update, she welcomed Nathalie Thibault to the staff as technical manager for glass products and Canadian government affairs. “She will be replacing me when I retire,” Webb said. “We are very fortunate to have Nathalie join the staff.”

When moving to her update, Webb reported that in 2019 much progress was delayed due to a national election in Canada. Now over, she said that in March there will be an abundance of meetings for the Canadian Commission on Building and Fire Codes.

She also went through various updates on items FGIA is monitoring, regarding everything from determining argon concentration in sealed insulating glass units to reviewing frost-point tests.

On the ISO side of the glass industry, “A lot of us have participation on this level regarding glass in buildings,” she said. “A ballot has been issued for laminated glass.”

Regarding glass strength, she said there is a work group looking at adding thinner glass.

“This is very popular in Europe,” said Webb. “Bill [Lingnell] and I were amazed when we were at glasstec two years ago at the strength of thinner glass.”

The FGIA Conference continues through Thursday. Look to USGNN™ for further updates.