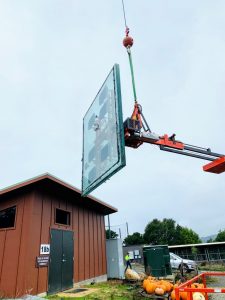 The broken glass lite at the Oakland Zoo weighed around 2,700 pounds.

After a small child broke a glass viewing window at the Oakland Zoo’s grizzly bear enclosure, Ergo was called to the scene. Alan Nudi, director of sales and rentals at Ergo Robotic Solutions, says his company has a relationship with the project’s glazing contractor, AAC Glass, that dates back three to four years.

“We’ve replaced a couple of different pieces of glass for them,” says Nudi, who explains that in this case the SkyHook WPI was required to be hung from a crane rather than the usual forklift to reach beyond overhangs. It has a lifting capacity of 4,000 pounds.

The glass lite that was removed included six, 1-inch thick lites of laminated glass, Oakland Zoo spokeswoman Erin Harrison told Fox News. Nudi says the unit weighed around 2,700 pounds and was cracked on one side, so it was important to remove it safely. 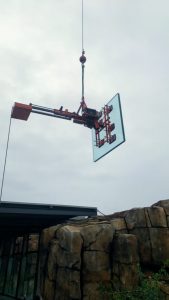 The SkyHook WPI was required to be hung from a crane rather than the usual forklift to reach beyond overhangs.

“Normally we would provide training on how to use the machine but in this case we would have been teaching them how to install one piece of glass. It was easier to just do the installation for them. If there were any issues with the machine our guy was right there. It was quicker, more efficient, involved no training and a tech was onsite,” says Nudi.

Nudi says that in situations where specialized machinery is needed for a project, companies have the opportunity to purchase or rent and purchase with rental credit. In this case, the company already had other machines it used for standard daily work and preferred not to have this on hand.

“They may have to replace another piece of broken glass but the size could be different or it could have a different overhang. In their mind they didn’t want to buy into one particular solution,” he says.