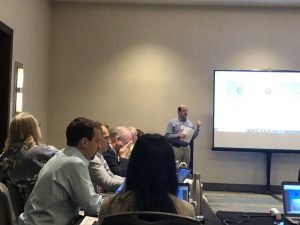 IGCC’s John Kent offers updates on a variety of glass programs during the FGIA annual meeting.

When the Glass Products Council met yesterday for the first time united under the Fenestration and Glazing Industry Alliance (FGIA), it was evident that this is a group that gets things done. The two-hour meeting was full of updates on the group’s glass efforts. The meeting took place during the FGIA Annual Conference in Fort Lauderdale, Fla.

“The SGCC took the bold step that if you want to certify you have to test it one time per year,” said Kent. “But it’s not extra testing, though you do have to test each thickness.” He also noted that testing sputter coated soft coat will cover all sputter coated.

“We are giving this a full two cycles of certification to work through,” he said. “We studied this for four years. Transparent products don’t test the same as coated. This is a step in the right direction.”

He also addressed some changes taking place in the market that the IGCC and FGIA will take a look at.

“The desiccant market has changed. It’s gone from one to two suppliers to several suppliers so how do you evaluate that?” he asked. “We are trying to compare desiccants from last year to this year to have a way to compare products. We are going forward with a pilot study of ten sets of desiccants.”

“After 30 years in this business, installation is one of the biggest reasons for failures of insulating glass units,” said Kent. “The holy grail is if we can tie these two together to reduce failures.”

NACC has 27 certified contract glazing companies, which he said is lower than they thought it would be at this point. The AGMT program has had 322 candidates thus far and an average 64% pass rate.

“It’s not easy,” said Kent. “They want well rounded people. They usually bomb one category but then the average is 81% after a retest.”

He reported that 260 are certified now. “We do provide a summary report so they know the areas in which they did poorly so they can concentrate studies there,” he said.

Kent stated that the group is running more trials and needs more data so they are working on building two new chambers.

“We selected three types of units using six spacer systems that represent 80% of the market,” he said. “We can’t get all three types to fail under the same conditions so that is why we continue to test. This has been very encouraging.”

Committee member Helen Sanders, responsible for strategic business development at Technoform North America, told those in attendance that having an EPD for glass products is required.

“Glass companies are starting to create their own EPDs and the smaller fabricators can’t afford this so a way to remove the barrier is to develop an industry wide EPD,” she said. “But you can’t use that EPD if you aren’t involved in creating it and providing data.

“I suggest the fabricators in this room do this,” she said. “It could cost $30,000-$50,000 if you do it individually so it would be cheaper through FGIA where you have multiple companies contributing.”

Urmilla Sowell, technical director for the National Glass Association (previously with the former Glass Association of North America [GANA]), pointed out that the EPD would be based on the Product Category Rule (PCR) that GANA and FGIA developed.

“We have done a lot of webinars, etc., for a while now,” said Sowell. “We are telling people it’s coming but we aren’t getting a lot of takers.”

Sanders then suggested tabling the discussion until there is more interest. “We have been beating the drum,” she said.

The cost of embarking on the EPD is unknown so Webb and Sowell said they will get together to “tackle that” and gain more information.

The Annual Conference continues through Thursday. Look to usglassmag.com for further updates from the event.