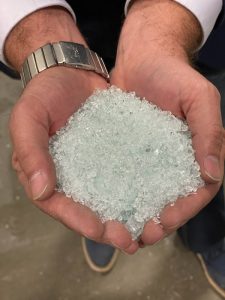 Infinite Recycled Technology has invented a machine that recycles nearly 100% of laminated glass.

Approximately 11 million tons of architectural glass are disposed of in landfills each year. Infinite Recycled Technologies in Albert Lea, Minn., a division of Watson Recycling, has sought to reduce that waste. The company has created proprietary technology that recycles laminated glass by separating the glass lites from the plastic interlayer through a mechanical process.

“When it comes to laminated glass we are able to recycle just about 100%. The plastic and glass are fully recyclable with some small loss,” says Jeremiah Watson, CEO of Infinite Recycled Technologies.

Several glass manufacturing customers approached Watson Recycling looking for a way to recycle laminated glass. Watson says at first his family-owned company wasn’t interested in recycling the laminated glass themselves, so reached out to others that could possibly take on the jobs. Once the company realized that nobody was recycling it, they decided to do it themselves.

“We invested the time and resources into it. We’ve been working on this for a couple of years now,” says Watson. 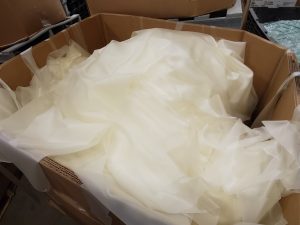 The company separates the glass from the interlayer and both parts are recyclable.

Infinite Recycled Technologies has been accepting laminated glass for around eight months on a limited basis.

“We have worked with customers to try to divert as much as we can from the landfills,” says Watson, adding that most of the laminated glass is architectural. “Cardinal Glass was one of the first companies to jump on board.”

Infinite’s current capacity to recycle laminated glass is limited, but the company is planning to ramp up its capacity in the next three months.

“We’ve moved to a new facility and are installing the equipment now,” says Watson. “We’ll be able to recycle about 20-30 thousand tons per year once we’re done with the build-out.” 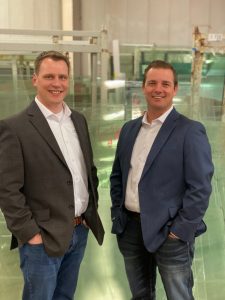 The company is intent on running its recycling production line and making sure all the kinks are worked out before pushing ahead with anything beyond its current capacity.

“We’re fairly confident that in the next couple of years we’ll have strong partnerships to benefit many companies across the country,” says Watson.

He sees the demand for laminated glass recycling increasing as glass manufacturers realize the cost savings, the contribution to LEED and lifecycle assessments of their products, and as they become more concerned with the sustainability of their products.

“Many companies know how long it takes glass to break down. On average, it takes 1 million years for a glass bottle to break into sand,” says Watson. “They understand that they are filling landfills with something that will never go away … Landfill space is also limited.”