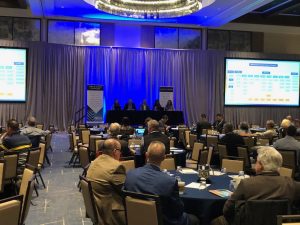 The BEC Conference began with the Installing Committee meeting to address technical updates and activities.

Technical activities and code updates helped open the Building Envelope Contractors (BEC) Conference, which is taking place in Nashville, Tenn.—the first time the event has been held in a location other than Las Vegas. The event, organized by the National Glass Association (NGA), includes a number of presentations and discussions, along with a tabletop display where exhibitors are highlighting new products and developments.

During the Installing Committee meeting, which took place this morning, the group addressed some activities taking place within the Fabricating Committee that also have relevance for installers. One of those topics is the issue of edge grinding laminated glass, and whether this should be done after heat treating. There are some companies that feel strongly about whether or not this should be done. Urmilla Sowell, NGA technical and advocacy director, explained that the Fabricating Committee is addressing this issue in an effort to put some science behind it, to learn more about how much can be grinded/how much of a strength reduction occurs.

Another point of discussion from fabricating activities that will impact installers is bent insulating glass units. Fabricators are working to address questions and design considerations.

Some other technical working group areas for the installing committee include thermal bridging; development of a commercial systems fenestration manual; specifications and how to address these issues with the end goal of providing specification guidelines; and an AIA presentation on framing systems with relevant building applications.

Energy codes consultant Tom Culp provided an update on codes geared specifically for what glaziers need to know. He explained that there’s a lot going on right now, and there’s been continued advancement in energy efficiency in the codes. For example, he said there’s new thermal bridging requirements, and increasing focus on renewable energy. Also, local cities/states are becoming more active in doing their own thing as opposed to just following national model codes.

Speaking of ASHRAE 90.1-2022, Culp said there is a thermal bridging proposal to reduce bypassing on insulation through, for example, parapets, balconies, brock shelf angles, etc., where there can be a tremendous amount of heat loss. This change, he said affects the installation details at the wall/window interface and at sunshade attachments. This is going into its second public review.

“However, thermal bridging is being looked at more carefully in several places already, most notably Vancouver and Seattle. Seattle makes them account for the amount of metal penetration through insulation, and Vancouver makes them include the effects of thermal bridging in the performance modeling,” he said.

Culp pointed out that achieving the window/wall interface requirements should be fairly easy. Installers will need to align the glazing with the insulation layer and, for recessed windows, wrap the insulation or use a wood buck.

Speaking of local activity, Culp pointed out newly implemented energy codes and that several locations recently moved to the 2018 IECC/ASHRAE 90.1-2016. He said while it’s normal for states to go through this, there are also cities doing this.

“Cities and states are becoming more active going beyond the national model codes,” he said.

He also addressed the new stretch code requirements in New York and Washington, which do not “ban glass.” For example, in New York achieving a U-factor of 0.36 and a solar heat gain coefficient of 0.36 can be done with a thermally broken frame, low-E, argon fill and a warm-edge spacers. However, another step was just announced. Starting in May 2020, while the U-factor for curtainwall remains at 0.36, a new U-factor of 0.30 for fixed windows and of 0.40 for operable windows will be in place below 95 feet.

Culp also provided an update on activities within the National Fenestration Rating Council (NFRC) and its Component Modeling Approach (CMA) certification program. A Cadmus study showed little use of the CMA on an overall national scale. Some of the reasons included timing (conflicts with project timeline) and cost. There is now a new effort to revise the commercial rating system and to try to serve the needs of different types of companies with two paths. This would include a certification for custom projects, which would certify for a specific building project and would not include physical validation test. “That’s what was causing the delays … this is simulation only,” said Culp. The other path would be a certification for commercial products. This would be for individual products and product lines in the Certified Products Director. Licensed users can use the NFRC web tool for generating label certificates with custom gazing packages and sizes.

Culp said this is important for the installers because as the general contractor or architects get these requirements, they are going to come to the installer to address these issues and answer questions.

The BEC Conference takes place through tomorrow. Stay tuned to usglassmag.com for more news and reports.